Canadian Milos Raonic knocks off American qualifier in fist round in St. Petersburg 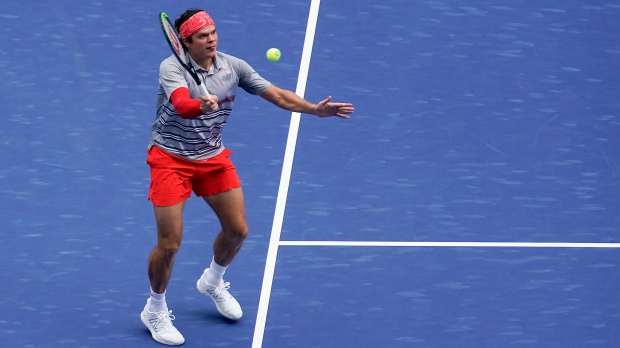 Milos Raonic, of Canada, returns a shot to Vasek Pospisil, of Canada, during the second round of the US Open tennis championships, Thursday, Sept. 3, 2020, in New York. (AP Photo/Seth Wenig)

The sixth-seeded Raonic, from Thornhill, Ont., skipped the recently concluded French Open, which is played on clay - traditionally the weakest surface for the Canadian.

The St. Petersburg Open, an ATP Tour 500 event, is played on hard courts.

The hard-serving Raonic had 21 aces, while his 123rd-ranked opponent had none. Raonic saved all five break points he faced.

Raonic, ranked 21st in the world, will face world No. 52 Alexander Bublik of Kazakhstan in the second round.

Second-seeded Denis Shapovalov of Richmond Hill, Ont., will meet Viktor Troicki of Serbia in a first-round match on Wednesday.

This report by The Canadian Press was first published Oct. 13, 2020