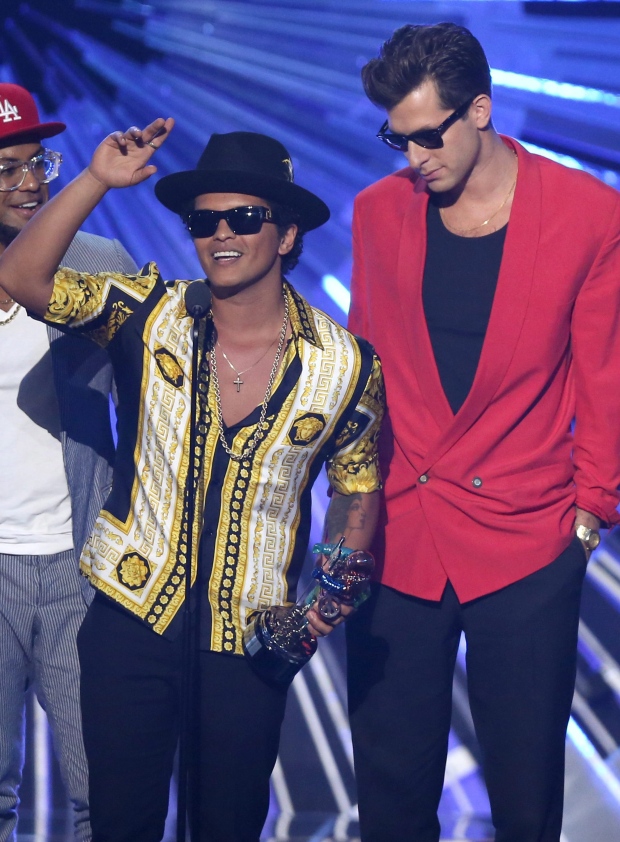 In this Aug. 30, 2015, file photo, Bruno Mars, left, and Mark Ronson accept the award for male video of the year for “Uptown Funk” at the MTV Video Music Awards in Los Angeles. (Photo by Matt Sayles/Invision/AP, File)

TORONTO -- He helped build "Uptown Funk" with Bruno Mars and recorded the teacup-shattering power vocals of Adele in an intimate studio session.

Now, Canadian sound engineer Charles Moniz is heading to the Grammys for the first time, with a nomination for record of the year for Mark Ronson's "Uptown Funk" featuring Mars.

Moniz, who grew up in Burlington, Ont., says he helped come up with the catchy "doh" vocal bassline that kicks off "Uptown Funk" while Mars was on tour.

The team had been stuck on the chorus for a while, until Mars (nee Peter Hernandez) came offstage after a show one night and proclaimed: "I got it."

"They were tearing down the venue and packing up everything to go and we were still in that room and that's where that vocal bassline came," he says. "All that came in the dressing room."

It was producer-songwriter Philip Lawrence who had suggested they needed an opening bassline, but he couldn't play the instrument so Moniz told him to sing it instead.

"That became what stayed on the album," says Moniz, who is based in Toronto and Los Angeles.

"There's definitely a larger element working with Bruno where you feel like you're with your buddies, just coming up with music and having fun."

Moniz also worked on Adele's song "All I Ask" from her blockbuster new album "25." He joined the project via Lawrence and Mars, who co-wrote the track.

Moniz worked the recording side of things while Adele, Mars, Lawrence and songwriter-producer Christopher (Brody) Brown gathered around a grand piano.

At one point a studio assistant walked in the room to give Adele some tea and was startled when she belted out a verse.

"The lights were down as she was singing and he thought she had finished singing but she was actually just about to hit one of the highest notes in the song," Moniz recalls with a laugh.

"He said it was so loud he actually freaked out and dropped the tea on the ground."

The recording with Adele was fairly quick and simple, says Moniz: "She got behind the mic and it was like, 'Well, that sounds incredible."'

By contrast, "Uptown Funk" took seven months to make, because they were working on it while travelling with Mars on his Moonshine Jungle Tour. Whenever there was a break they'd chip away at it, sometimes using makeshift studios set up by Moniz in dressing rooms.

They recorded it in Toronto, Vancouver, Los Angeles, Memphis and London, England.

Moniz, who was Avril Lavigne's bass player from 2001 to 2005, has been working with Mars for about five years now. He used to be his bass player and has worked with him as a recording engineer on all of his live shows, including his Super Bowl showcase and Grammys performances.

He's now working with him on a new album.

"I just like that he likes using live things," says Moniz. "We just get to use real instruments and that's just something I grew up with. And he's very creative and by far the best songwriter I've been exposed to."