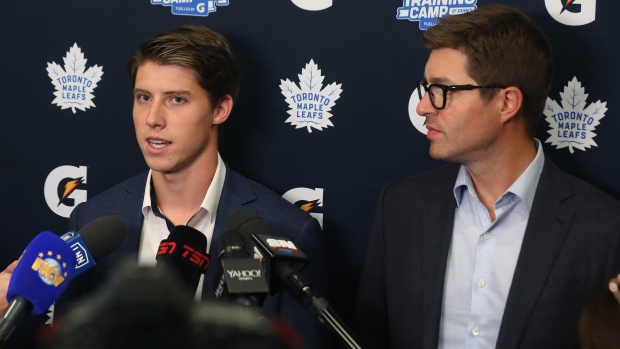 Toronto Maple Leafs Mitch Marner (left) and Leafs general manager Kyle Dubas are surrounded by media during a press conference at the Paradise Double Ice Complex in Paradise, NL on Saturday, September 14, 2019. Marner and the Maple Leafs have agreed on a new contract after a long off-season of negotiations. THE CANADIAN PRESS/Paul Daly

The pair stood side-by-side on Saturday while fielding questions about the six-year deal Marner signed in time to join his Maple Leafs teammates for the second day of training camp in Paradise, N.L.

“We're just happy to be here. We missed no games and that's really the objective,” said Dubas. “Obviously he wanted to be here and we got it done.”

The former restricted free agent agreed to a six-year deal with Toronto on Friday, with an average annual value of US$10.893 million.

Marner, who grew up in the Toronto area, said he was relieved to see the process come to an end. He added that his teammates shared his excitement when he broke the news about his contract to them.

“We wanted to be here, we didn't want to miss many days and wanted to get on the ice with all these guys. Lucky enough we get to do that tomorrow,” Marner said.

Dubas thanked the 22-year-old for his commitment to the team by agreeing to a salary slightly below his expectations, in order to have the team in a good place for the start of the season.

“I think Mitch would want more and we would want less, but it's something that we both agree on,” Dubas said of the deal, adding hopes that Marner's pay rate and his time with the Maple Leafs set him up well for his next contract.

The star right-winger, who was drafted by the Maple Leafs in 2015, signed his first long-term contract with the team after a long period of off-season of negotiations. Dubas said contract talks came to a head with a lengthy and direct conversation on Thursday.

Dubas said competent staffers are dealing with the team's salary cap, which is now about US$13 million over its upper limit of US$81.5 million with Marner's deal.

According to CapFriendly.com, Toronto will have to place Nathan Horton, David Clarkson and Zach Hyman - all of whom are currently injured - on long-term injured reserve by the end of training camp to create enough relief for cap compliancy. Even then, the Maple Leafs may have to become creative with their roster.

Complicating matters is the fact that Hyman will likely be fully recovered from his ACL surgery by late October.

After last year's negotiations with William Nylander bumped up against the December deadline, Dubas said he was “thrilled” that discussions with Marner wrapped up relatively quickly by comparison.

Dubas said he would have preferred all players' contract negotiations to wrap up at the same time, but said he felt positive about Marner's agreement, which sets his team up with a solid core of players for the next few years.

Years training with the same players will take pressure off the athletes, Dubas said, allowing them to focus on their sport.

“I understand that people will look at it and say no team has done it this way before. That said, we have these guys committed to us for an extended period,” Dubas said.

“We can just enjoy being together, have fun being together as a program, continuing to grow together without having to worry about anybody going anywhere. To me, in my position, it means a lot.”

Training camp will wrap up Sunday afternoon in Paradise.

A Leafs alumni game is scheduled for Sunday evening and a pre-season game against the Ottawa Senators is set for Tuesday at the Mile One Centre in St. John's.

Toronto Maple Leafs Mitch Marner and Leafs general manager Kyle Dubas are surrounded by media during a press conference at the Paradise Double Ice Complex in Paradise, NL on Saturday, September 14, 2019. Marner and the Maple Leafs have agreed on a new contract after a long off-season of negotiations. THE CANADIAN PRESS/Paul Daly