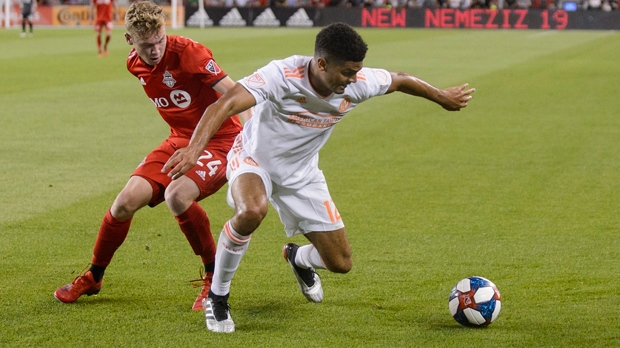 Atlanta United defender Miles Robinson (12) battles for the ball against Toronto FC forward Jacob Shaffelburg (24) during second half MLS soccer action in Toronto, on June 26, 2019. Jacob Shaffelburg's first exposure to the pressure of being a starter for Toronto FC was on the overwhelming side. He admitted his nerves got the better of him in the minutes leading up to his debut in front of the 24,598-strong home crowd against Atlanta United at BMO Field on Wednesday. THE CANADIAN PRESS/Andrew Lahodynskyj

TORONTO -- Jacob Shaffelburg's first exposure to the pressure of being a starter for Toronto FC was a bit overwhelming.

The Canadian teenager admitted his nerves got the better of him in the minutes leading up to his debut in front of 24,598 fans against Atlanta United at BMO Field on Wednesday.

Several teammates tried to put the 19-year-old from Port Williams, N.S., at ease, counselling him to be himself. The match then began. All of a sudden, it was just another game for Shaffelburg. He was right in the middle of it.

The forward raced down the left side. He engaged in a give-and-go with midfielder Marky Delgado. Shaffelburg then booted a pass along the ground that eventually found its way to teammate Tsubasa Endoh for a goal 29 seconds into the match for the fastest goal in club history.

Shaffelburg assisted on another from Alejandro Pozuelo later in the first half of TFC's 3-2 victory.

“It was crazy,” Shaffelburg said. “Leading up to it, I was nervous.

“But once I got out onto the field, it felt like a normal game.

“It was an amazing feeling to be out there, the most fans I've ever played in front of. I gave my mom a big hug after the match. She was all teared up.”

His mother Linda and father Michael were part of the buoyant crowd that watched TFC snap an eight-game (0-5-3) winless streak.

“Outstanding, just outstanding,” TFC head coach Greg Vanney said of Shaffelburg's first MLS game as a starter, four days after he made his debut as a substitute in the 59th minute of Toronto's 3-0 loss in Dallas last Saturday.

“But the kid can run all day. He's incredibly fast, and he puts a ton of pressure on the back line and outside backs of the defensive side.”

Port Williams is a small community not far from Acadia University in Wolfville and 75 minutes north of Halifax.

Most of Shaffelburg's friends - such as neighbour Drake Batherson, who played 20 games for the Ottawa Senators this past season - played hockey.

But Shaffelburg was inspired to play soccer because his older sister Jessica and older brother Zach were soccer nuts. The youngest of the three attended high school at Berkshire in Sheffield, Mass., a program that also produced Jack Harrison, who scored four goals for Leeds United in the 2018-19 English Champions League.

“I remember he tried to play street hockey with us, but he wasn't the best,” Batherson recalled Friday at the at the Senator' development camp in Ottawa. “Then we would go over to his house to play soccer and he had a turf field in his backyard and he would just dominate us.

“Then he went away to prep school and we would watch his highlights. He's an unreal player. To see him do so well with Toronto FC is amazing. He's representing all of us back home and making us proud.”

Shaffelburg was offered a scholarship to the University of Virginia. But instead, he signed a pro contract with the TFC Academy. He would have been promoted earlier, but TFC wanted him on the MLS team as a homegrown player. That meant once he was added to the team's homegrown list, he had to spend a full year with the TFC Academy.

Besides his speed, Vanney admires the youngster's personality.

“The kid doesn't seem to be in awe of anything,” Vanney said. “But he needs to continue to be himself and be aggressive, and we'll keep teaching him as he goes.

“I'm not going to put any pressure on him to play this way every game. It's a career. There are steps. He was fantastic (on Wednesday). I think he can make a difference in this league.”

HEALTH REPORT: Toronto defender Drew Moor missed his team's win against Atlanta after he suffered “a knock” late in the Dallas game. He's expected to return to action against D.C. United. TFC defenders Auro and Chris Mavinga, out with hamstring injuries, also could return on Saturday.

VAR HURTS TFC: Twice in TFC's win against Atlanta, the video assistant referee awarded penalty shots to the defending champions. While Toronto coach Greg Vanney understands the need to get the calls right, he doesn't like the uncertainty it causes when employed after goals. “I think it sucks out the emotion out of the game sometimes,” he said.

- With files from Lisa Wallace in Ottawa.