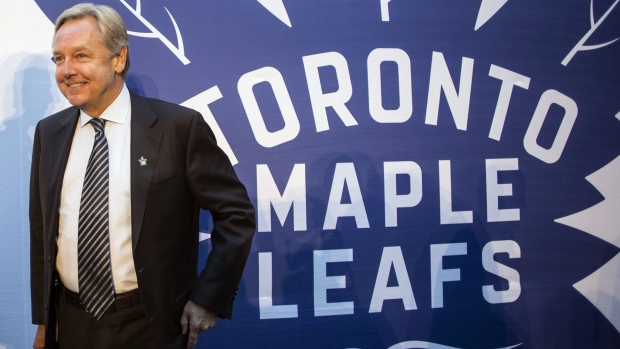 Michael Friisdahl, president and CEO of Maple Leaf Sports and Entertainment, poses in Toronto's Maple Leaf Square on October 13, 2016. Toronto FC is back in action. THE CANADIAN PRESS/Chris Young

Toronto FC is back in action. The Raptors and Maple Leafs are gearing up for their return to play.

But today there are still more questions than answers as Maple Leaf Sports & Entertainment looks to the future. It's all about planning for the new normal, rather than waiting for normal to return.

“As we look at return to play, there's no real playbook here,” MLSE president and CEO Michael Friisdahl said in an interview.

“What makes this crisis very different from anything else that most CEOs have managed their way through is the uncertainty of when you can go back to any kind of normal and what that new normal might look like,” he added.

“Most other crises that I've been through my career - and I've been through a number, particularly in my days in the travel, hospitality and aviation sector whether it was 9/11, whether it was the outbreak of SARS, there's been many events but there has been more of a containment and a little bit more visibility on when things would go back to normal.”

MLSE, whose mandate is to entertain the masses, was hit hard in March by the global pandemic.

“We've gone from essentially shutting down six teams and six leagues. Postpone, cancel concerts - all live events. Having to deal with our employee group, both full-time and part-time. Essentially in one day,” said Friisdahl.

Sport has returned, albeit in a bubble with no fans and stringent COVID-19 testing protocols.

What happens after that is still to be determined. Friisdahl isn't sure when the doors will open again.

“It's difficult to predict, as we sit here today. And I think it's important that we go through his period of being able to play before no fans ... That'll start to develop learnings in terms of how we might evolve back to play, which hopefully will come sooner than later.

“But I think it's just too early to predict at this time when that's going to happen.”

MLSE has spent “a lot of time internally” looking at options for events with and without fans. That included searching for ways to provide an enhanced digital experience, engaging fans at home.

Expect a different fan experience when some are allowed back into the building.

Tickets will be digital. Cashless transactions will be encouraged. Getting in and out of building will be more organized. Initially it will be “very unlikely” that food and drink are served.

Planning continues on how to handle different levels of fan participation that may come down the line.

“If we can't have all the fans into the building then there will be a process in terms of how we can get the most amount of fans in. But we've not finalized what that looks like at this point,” Friisdahl said. “And it's difficult to comment on because the number that we'll be able to have in the arena will be massively important to that strategy.”

MLSE was quick to establish a COVID-19 task force to help navigate a landscape that keeps evolving.

Discussions with the different leagues have been essentially the same - how to get back to business safely. Complicating matters is the fact that teams in different markets may be in different circumstances, depending on the local COVID situation.

Friisdahl, who was named to his MLSE post in October 2015, notes that his company went from the Raptors championship parade to the pandemic in a period of nine months.

From good times to bad, he sees MLSE playing an important role in the community - hence the meals program that saw Scotiabank Arena, starting in April, turn into a giant kitchen. The program's goal was to prepare 500,000 meals for Toronto's front-line health-care workers and their families as well as the city's most vulnerable via community agencies and shelters.

“I'm proud of the way our team has come together, right across the organization to deliver,” said Friisdahl.

Friisdahl credits MLSE's ownership - board chairman Larry Tanenbaum, Bell and Rogers - for their commitment to the cause on and off the playing field.

MLSE's team presidents subsequently joined forces with the Blue Jays to form the Team Toronto Fund, having their club management, coaches and players provide additional assistance - including a special hardship fund where all impacted employees can apply for further assistance.

MLSE has some 750 full-time employees and 4,000 hourly and part-time workers.

“So far we've been able to avoid any furloughs - at this time,” Friisdahl said.

The company announced help for hourly employees in the form of a payment to top up their Employment Insurance benefits to 95 per cent of their regular average earnings through the NHL regular season.

MLSE has also been impacted by other world events. Black Lives Matter, the fight for racial equality, and the deaths of George Floyd and others have left their mark.

Raptors president Masai Ujiri and Toronto FC GM Ali Curtis have been among the leaders in the MLSE response.

“There's no question we can all do better on this,” said Friisdahl. “I think this period has certainly caused everyone here at MLSE to listen and learn, not only how to be a better company but to play an important leadership role in the community as we fight systemic racism.”

Given MLSE's wide audience including youth and the platform its athletes and teams have, “we have a real opportunity here and I think a duty, quite frankly, to be an ally and an advocate for change” he added.

This report by The Canadian Press was first published July 22, 2020.