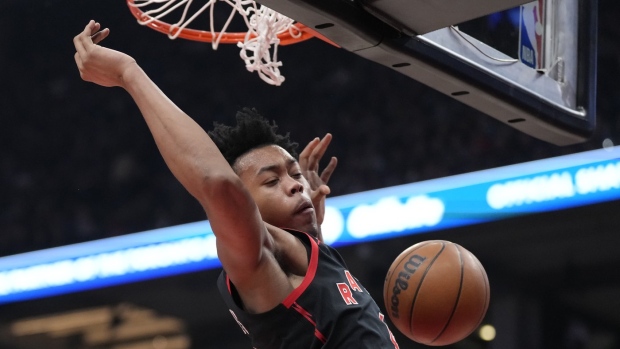 Scottie Barnes knows that his Toronto Raptors are finally finding their rhythm. Now they just have to stay motivated.

Barnes had 21 points, a team-high nine assists and seven rebounds as Toronto beat the Charlotte Hornets 124-114 on Thursday. It was the Raptors' third straight win, their longest such streak of the season.

"“We’ve just got to keep going. Don’t settle for less. Take it one game at a time right now," said Barnes. "Stay hungry. That’s what the team mindset is right now, stay hungry.

Pascal Siakam led Toronto (19-23) with 35 points on just 13 field goal attempts. It was his team-leading seventh 30-point performance this season and 50th of his career. He also had seven rebounds and three assists.

"There’s a lot of film watching and just trying to see how I can exploit the defence," said Siakam. "I think most of the time, for me, I always wanted to be quicker and just finish.

"But sometimes, it’s taking what the defence is giving you and being more calm."

LaMelo Ball led Charlotte (11-32) with 32 points and seven assists before fouling out in the fourth quarter. Terry Rozier added 21 points, while Mason Plumlee had a 16-point, 15-rebound double-double as the Hornets lost their third in a row.

It was the second consecutive game at Scotiabank Arena between the two teams.

Toronto made a season-high 20 three-pointers in 44 attempts on Tuesday night as the Raptors beat Charlotte 132-120. The Raptors shot 51.8 per cent from field-goal range in the second game, and made 10-of-28 three-pointers.

"We should have made another eight to nine probably, right?" said Toronto head coach Nick Nurse. "Because they were as open as they can be with with some of our really good guys taking them.

"But again, create the right shots and get a win, not worried about it."

The Raptors led 97-88 heading into the final quarter, when Charlotte began to press.

Ball drove to the net for a layup to pull the Hornets to within nine with 8:45 on the clock. Plumlee then had a two-handed dunk to cut the Raptors lead to 103-96 and force Toronto to call a timeout to regroup.

Fred VanVleet's layup extended Toronto's lead to 105-96 and Barnes followed it up with a layup of his own. Jalen McDaniels replied with a deep three that bounced around the rim before falling.

A Siakam jump shot gave him 30 points on the night and pushed the Raptors' lead back to double digits. After a Charlotte timeout, P.J. Washington sank a hook shot to make it 109-101.

Plumlee's errant pass with four minutes remaining led to a Toronto breakaway but Siakam was fouled before he could finish the drive. He made two free throws and then dunked following a Hornets turnover to make it 113-103.

Barnes made one of his two free throws before Toronto's smothering frontcourt defence created another turnover. The Raptors couldn't capitalize on the possession and Washington drilled a three-pointer with 2:21 left to play.

Plumlee was fouled as he made a putback layup, making his one free throw to cut the Raptors' lead down to 114-109.

VanVleet's three from the corner brought the sell-out crowd of 19,800 to their feet with 48.5 seconds left, giving Toronto an eight-point lead, and forcing another Hornets timeout.

"We double-teamed there late when we didn’t need to," said Hornets head coach Steve Clifford. "That led to the VanVleet three."

Gary Trent Jr. made a pair of free throws for Toronto with 39 seconds left to play. Ball made two free throws of his own, then Barnes sank two more from the line to make it 121-110.

Trent hit two more free throws for the final score of the game.

The Raptors host the Atlanta Hawks on Saturday night. Toronto beat Atlanta 139-109 in the two teams' last meeting at Scotiabank Arena on Oct. 31, but the Hawks earned a 124-122 overtime victory on Nov. 19 when they last met.

This report by The Canadian Press was first published Jan. 12, 2023.