Sens offer use of CTC, other facilities to Ontario government amid pandemic 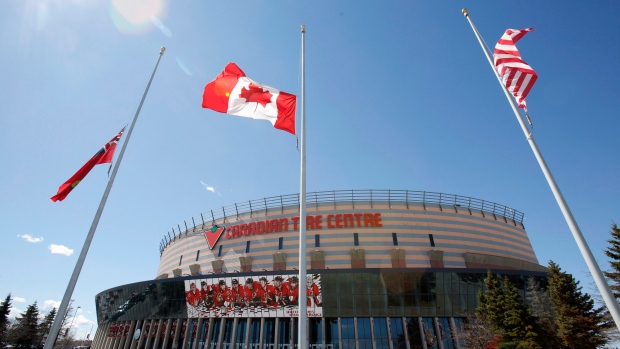 The Ottawa Senators have offered use of the Canadian Tire Centre, the building's nine adjacent parking lots, and three other community arenas affiliated with the team to the Ontario government for temporary use during the COVID-19 pandemic.

A team spokesperson said Friday that Senators owner Eugene Melnyk approached the province this week and is awaiting a reply.

The offer comes with the potential use of 17 unleased private suites inside Ottawa's NHL rink - including Melnyk's - and amounts to roughly 200,000 square feet of adaptable space.

The board of directors for the city's three Bell Sensplex arenas, which are run via public/private partnership, voted unanimously to endorse the offer. The team spokesperson added the municipal government has been apprised of the situation.

The spokesperson added the Senators would ensure the Canadian Tire Centre, which is located in the west-end suburb of Kanata, is staffed with essential workers.

Like most other sports, the NHL paused its season March 12 amid the novel coronavirus outbreak. Six members of the organization, including at least two players, tested positive for COVID-19, as did the team's radio colour commentator.

The Senators were on a road trip in California right before the NHL suspended play. Two players on the Colorado Avalanche, who were also on the West Coast before the hiatus went into effect, are the only other NHLers with confirmed positive tests.

Melnyk announced earlier this week the organization would be implementing temporary layoffs and salary reductions due to the pandemic.

Melnyk pledged last month to pay part-time and hourly arena staff at the Canadian Tire Centre and the team's American Hockey League affiliate in Belleville, Ont., through to the end of their respective seasons.