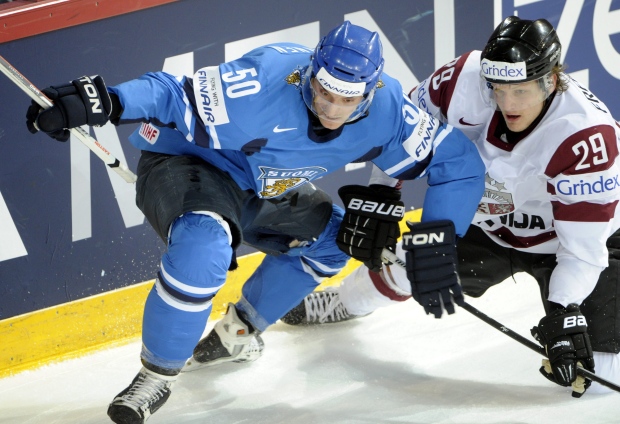 In this Tuesday, May 14, 2013, file photo, Finland's Juhamatti Aaltonen, left, vies for the puck with Latvia's Ralfs Freibergs during a 2013 IIHF World Championships Group B preliminary round match in Helsinki. (AP Photo/Lehtikuva, Jussi Nukari, File)

ZURICH, Switzerland - Latvian hockey player Vitalijs Pavlovs has been banned for 18 months after testing positive for a banned stimulant at the Sochi Olympics.

The International Ice Hockey Federation says Pavlovs avoided a two-year sanction because he acted "without significant negligence in failing to verify the safety of the supplements he was taking."

The IIHF says another Latvian player, Ralf Freibergs, is provisionally suspended and excluded from next month's world championships in Belarus while his doping case is heard.

The 22-year-old Freibergs tested positive for a steroid in Sochi.

Both players were caught after Latvia's 2-1 loss to Canada in the quarterfinals on Feb. 19. Both were disqualified by the International Olympic Committee.