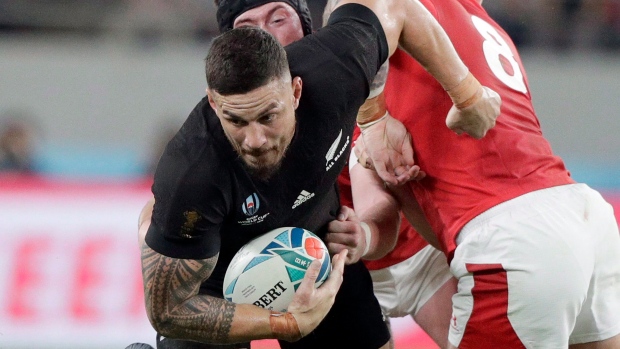 New Zealand's Sonny Bill Williams is tackled by Wales' Ross Moriarty during the Rugby World Cup bronze final game at Tokyo Stadium between New Zealand and Wales in Tokyo, Japan, Friday, Nov. 1, 2019. The Toronto Wolfpack proved doubters wrong by managing to establish a toehold for a little-known sport in North America. Now the transatlantic rugby league team is opening the vault in the hope that All Blacks star Sonny Bill Williams will put it on the worldwide map as the Wolfpack prepare for their step up into England's top-tier Super League come February. THE CANADIAN PRESS/AP, Mark Baker

LONDON - Sonny Bill Williams says he welcomes the pressure that comes with the worldwide attention surrounding his signing with the Toronto Wolfpack.

The All Blacks rugby star, whose rich two-year contract with Toronto was announced a week ago, was unveiled at a news conference Thursday at Emirates Stadium, home to the storied Arsenal soccer club.

“It's been a whirlwind,” said Williams. “This deal came to fruition in quite a short space of time ... I'm really grateful and blessed for this opportunity but I understand what I'm coming into. But as a sportsman what better, I guess, pressure environment would you want to test yourself (in)?

“It's great what Toronto have done, where they're based, what they're trying to achieve ... It all kind of lined up. For me as a man of faith, I just really believe that it's just meant to be.”

He said he embraces the transatlantic Wolfpack's mission to open up North America to rugby league.

“Throughout my career I've gotten the best out of myself when I've really believed the purpose of what the organization's trying to achieve,” he said.

Williams, who met his new teammates at the Wolfpack training camp Wednesday, has been compared to David Beckham and LeBron James as game-changers in their sport. The 34-year-old Williams, who is switching back from rugby union to rugby league, downplayed such comparisons.

Wolfpack coach Brian McDermott said the Wolfpack were getting more than a world-class international player.

“The guy's a brand and he's been building that brand up for a number of years,” he said. “I think the thing for me that I would like to stress to the room first and foremost is I was really keen to get the player. We as a club are going to use that brand, utilize that brand for sure, in terms of making the profile of Toronto Wolfpack and ultimately Super League bigger, it's going to help that.

“But I'm was just keen to stress that I'm really keen and pleased we've signed a brilliant player.”

McDermott flew out to Japan to have dinner with Williams during the recent Rugby World Cup to feel each other out. The dinner came after England had beaten New Zealand in the semifinals.

“I think we both knew that night that this could be good,” said McDermott, a former England and Great Britain international who coached Leeds Rhinos before helping Toronto earn promotion in October to England's top-tier Super League.

The Toronto coach said he had one overriding question: “Are you coming to be a player?”

McDermott said Williams told him: “I need to earn the respect of everybody at the club before I start being what you think you've signed on.”

Williams described the dinner as “awesome,” saying a meal that was to have taken 30-40 minutes lasted two hours.

“We're really pleased, excited. He's going on a journey with us,” said McDermott, while cautioning that fans won't see the best of Williams until the final third of the 2020 season as he makes the transition back to rugby league.

Williams said he had planned to play another year of rugby union in New Zealand after the World Cup but was convinced otherwise by the Wolfpack.

He also talks about the importance of his faith.

“At a young age I was successful. I had wealth, I had fame, I had eyes of the opposite sex on me and I guess where I was from, how I grew up, that was classed as successful. But I always felt hollow, I never felt like I was whole and I was always yearning for something. And that's what Islam has given me.”

Williams got a glowing welcome from Wolfpack officials.

“To say it's a monumental day for our franchise is clearly an understatement,” said chairman and CEO and Bob Hunter.

“Welcome to Toronto, a very very busy sports market, six million people,” he added. “We're sure you're going to enjoy your time there.”

“This is someone who has not just excelled in one sport, but across four disciplines,” added GM Martin Vickers, referencing rugby league and union, rugby sevens and boxing.

Williams went 7-0-0 as a boxer, claiming the New Zealand and WBA international titles. He confirmed his Toronto contract allows him to box again, if he so desires.

He won two World Cups with New Zealand in rugby union as well Super Rugby club titles with the Chiefs and Crusaders. In rugby league, he won two NRL championships with the Bulldogs in 2004 and the Roosters in 2013.

He represented New Zealand at rugby sevens at the Rio Olympics before being sidelined by injury at the Games.

In addition to dining with McDermott, Williams said reached out to a couple of the Wolfpack's Australian players.

“From all accounts, yes, it's different, there are challenges. But from where I come (from), in my journey there's always been challenges. So it's nothing that I'm not used to. Overall what they're trying to achieve on and off the field is something special. Instead of looking at, I guess, the challenge as 'Well, what if I fail?' it's 'What if we succeed and what I'm part of it?'

“North America, if that door opens, the amount of opportunities for young players coming through would be amazing, for themselves and their families. To say that I've been a part of that would be something special.”

Williams, a father of three with a fourth on the way, plans to return to Australia to work out for four to five weeks before joining the Wolfpack at their English training base.

Toronto opens life in the Super League on Feb. 2 against Castleford Tigers. The Wolfpack's home opener is April 18 against Hull FC.

This report by The Canadian Press was first published Nov. 14, 2019.