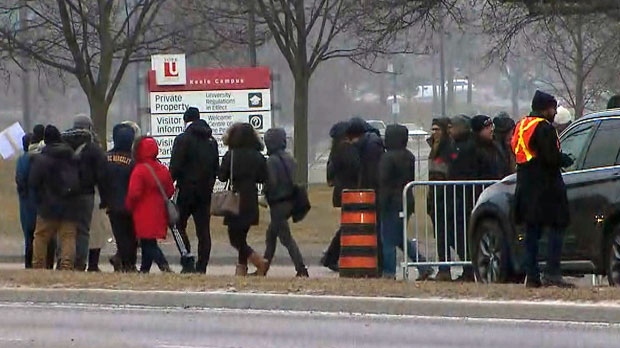 A union representing striking contract faculty, teaching assistants and other staff at York University is accusing the school of “needlessly prolonging” the labour dispute by refusing to return to the bargaining table.

Members of CUPE 3903 first walked off the job on March 5 after voting against what York described as its “final offer.”

The union did submit a counter proposal to the school‘s bargaining committee later that day, however it was promptly rejected and talks have not resumed since then.

In a letter sent to York University President and Vice-Chancellor Rhonda L. Lenton on Tuesday, CUPE 3903 Chairperson Devin Lefebvre says that the union “cannot, and will not, continue to bargain with ourselves” but “remains ready, willing and available to meet on short notice to continue negotiations.”

He said that the “sole impediment” to a resumption of talks so far has been the university’s refusal to meet.

York University has said that about 50 per cent of classes have been impacted by the ongoing work stoppage.

In a message posted to its website on Tuesday, the university accused the union of pushing for an unreasonable package of concessions, including wage increases of 3.5 per cent in each year of the agreement and a demand for 90 of its members to be transitioned into full-time faculty members over the life of the agreement. The university said that all together the demands would cost a total of $23 million, representing a 27 per cent increase on the cost of the last collective agreement.

“We feel like we have moved significantly towards addressing the union’s concerns but we haven’t seen equivalent movement to address our concerns,” Lisa Phillips, who is York's Interim Vice President - Academic and Provost told CP24 on Wednesday. “CUPE’s changes have been minor and their offers have not been in the realm of realism. We think our offer is very fair and we are absolutely ready to get back to the table as soon as we hear a counteroffer that provides a real basis for settlement.”

The university has always maintained that it is willing to go to binding arbitration on the outstanding issues that remain and on Wednesday Phillips said that the school would also be willing to bring in a mediator whose findings would be non-binding.

The union, however, has said that it believes that conventional bargaining is the only thing that will lead to a negotiated settlement.

Nasr told CP24 that her union is still awaiting a response to its counter proposal, other than an outright rejection.

“This is the second week that we have been out now waiting on them for a response to our counter proposals and they have not responded,” she said.

Members of CUPE 3903 have been without a contract since Aug. 31.