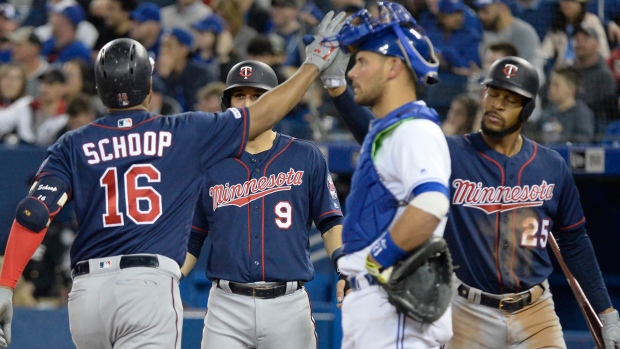 TORONTO -- Jorge Polanco matched a career high with five hits, including a two-run homer, as the Minnesota Twins cruised to a 9-1 win over the listless Toronto Blue Jays on Wednesday.

Kyle Gibson (3-1) was dominant, striking out 11 over six innings of work, and allowing two hits and one run for Minnesota (23-12).

Eddie Rosario, C.J. Cron and Jonathan Schoop added homers as the Twins completed a three-game sweep of Toronto and earned its 10th victory in 13 games.

Billy McKinney's solo home run in the bottom of the fifth inning was the lone bright spot as Toronto (15-22) lost for the eighth time in nine games.

McKinney's homer ended a 25-inning scoreless skid for the Blue Jays, who last crossed home plate in the seventh inning of Sunday's 10-2 loss in Texas.

Rosario hit a sacrifice fly to deep right in the first inning to bring home Max Kepler from third base. Kepler had led off the with a single and then advanced on Polanco's first hit of the game.

Thornton laboured through the inning, throwing 30 pitches and loading the bases with two outs, but induced a Mitch Garver infield fly to escape the inning trailing only 1-0.

In stark contrast, Gibson was the model of efficiency in the bottom of the inning, striking out Toronto's first three batters.

Polanco piled on in the second inning, driving the ball over the right-field fence and cashing in Kepler for a 3-0 Twins' lead.

With Thornton already at 58 pitches after two innings, Blue Jays manager Charlie Montoyo had Gaviglio warming up in the bullpen as Toronto took the field at the top of the third.

That pitching change wasn't fast enough as Thornton gave up a single to Rosario and then a home run to Cron to lead off the inning. Toronto catcher Luke Maile tried to buy Gaviglio some time with a quick visit to the mound but as soon as he returned to his position behind home plate Montoyo came out to pull Thornton.

He gave up a single to Marwin Gonzalez, struck out Garver, then Schoop crushed the first pitch he saw for a two-run homer and a 7-0 Minnesota lead. Gaviglio eventually got out of the inning, but not before all nine Twins batters made it to the plate.

Law came on to start the fourth inning, and was the most effective pitcher for the Jays, striking out two and seeing only four hitters. He finished his night with two scoreless innings and four Ks.

McKinney finally ended Toronto's scoring drought with a solo shot to right field in the bottom of the fifth. It was his second of the season and cut the Twins' lead to 7-1.

Rosario smashed his 13th homer of the season in the sixth inning, plating Polanco to make it 9-1. Polanco had reached base when his hit to deep left field bounced just inside the foul line and then into the stands.

Notes: The Blue Jays have Thursday off before hosting the Chicago White Sox for three games starting Friday. ... Vladimir Guerrero Jr., Toronto's highly touted rookie third baseman, was given the day off for a scheduled rest.