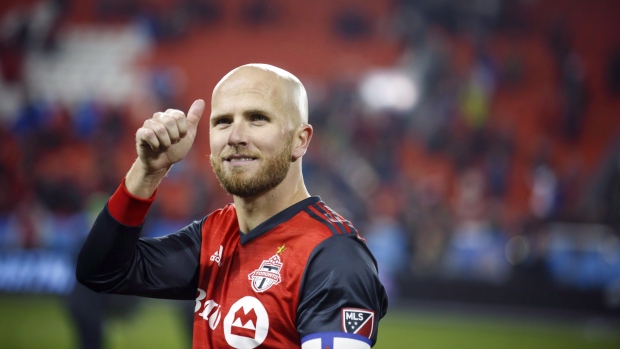 Toronto FC midfielder Michael Bradley (4) gives a thumbs up signal to the crowd following their victory against Atlanta United in MLS soccer action in Toronto, Sunday, Oct. 28, 2018. Buoyed by the return from injury of captain Bradley and Argentine newcomer Pablo Piatti, Toronto FC makes final preparations before it departs Friday for Florida and the MLS is Back Tournament. THE CANADIAN PRESS/Cole Burston

Toronto FC heads to Florida with some unease given recent positive tests there by FC Dallas players and the rising numbers of COVID-19 cases state-wide.

“There's concern, no doubt,” said head coach Greg Vanney. “Because it's showing that the (MLS) bubble is not impenetrable and there are some issues that are going on. The question is how quickly can the protocols that are in place down there get things under control so it doesn't start to spread inside of the bubble.

“That remains to be seen.”

Vanney says if he could, he would delay his team's departure to the MLS is Back Tournament at Disney's Wide World of Sports complex in the Orlando area.

“I don't know where it's going to go,” he said of the departure date.

Vanney said given the team feels comfortable and safe in Toronto and the situation is less stable in Florida, “it just makes sense ... that we don't go barrelling down right now until they know that have everything under control.

The TFC delegation is scheduled to leave Friday, the latest allowed by Major League Soccer which has mandated teams have to arrive at least a week before their first game. Toronto opens July 10 against D.C. United.

The seven-day requirement is presumably to allow players time to be isolated if they test positive in Florida.

Not everything has been smooth in the leadup to leaving. Vanney said training had to be scrapped Wednesday because of a delay in getting COVID test results back.

Still, Vanney says his players wants to take part in the tournament and are motivated to go deep into the World-Cup style event.

“At the same time, obviously they're not oblivious to what's happening,” he told a media conference call Thursday.

Asked if staging a tournament during the pandemic was worth it, Vanney replied: “it's a tough one.”

“I don't know. For me, if it's my call, there's a lot of things at play here,” added the father of four. “I have my concerns for our guys and for our team and our families and all that kind of stuff. But we're doing it. And if we're going to go do it, we're going to go do it with the intent to be successful.”

Still, what is going on south of the border is worrying.

“The challenge that we all have on the human side of the group (is) we see what's going on down in the U.S.,” Vanney said. “People are not taking things serious and it's completely, in a lot of ways, out of control. And with very little leadership going on down there, outside of the bubble that is whatever MLS is trying to create.

“The problem is the bubble is only as good as what gets into the bubble. And that's obviously becoming an issue, which is concerning for all of us. Our guys are very aware of it. Are they concerned? Yes. Are they right to be concerned? Yes, I guess.”

The league said Wednesday that two FC Dallas players tested positive upon arrival Saturday at the league's host hotel in Florida. Another four tested positive within the last few days.

The entire Dallas party went into isolation pending additional testing. While teams are staying in the same hotel, they are supposed to be isolated from other squads.

The Columbus Dispatch, citing a source, reported Thursday that a Columbus player had also tested positive in Florida. The Crew arrived Sunday.

Vanney says his team wants to “the best of our ability” create its own bubble with the MLS bubble.

“What we can control is what we do,” he said. “That's the first and foremost thing that we've got to try to do.”

Vanney says all MLS players coming into the bubble bear a responsibility to do the right thing leading into entering the controlled environment.

“I think some players have failed in some ways of keeping themselves quarantined and away from what's going on around them and not bringing it into the bubble ... The problem is we all rely on each other. That's the way this works.”

Florida reported a record 10,109 new cases Thursday, more than all the cases reported to date in Norway (8,865) according to the world Health Organization.

Toronto is bringing 29 players - all of its first-team players with the exception of rookie forward Ifunanyachi Achara, who is gone for the season after tearing his anterior cruciate ligament in practice Friday.

Star striker Jozy Altidore, who has been training on his own while fulfilling his mandated quarantine after returning from his home in Florida, is due to rejoin the full team Friday for practice.

Vanney said they will be careful with his return, saying it would be asking a lot to be ready for the first game.

The Vancouver Whitecaps were slated to leave Wednesday. But their departure was postponed after two inclusive tests that later turned out to be negative. The Whitecaps were undergoing additional tests Thursday.

The Montreal Impact, who open July 9 against the New England Revolution, were slated to leave Thursday.

While the Canadian MLS teams head south to the COVID hot spot of Florida, NHL teams reportedly will be coming the other way to play.

Canada, Vanney said, seems to have “a lot better control of the situation.”

“To be able to go into that environment as a team would be a lot more comfortable than going down to what has essentially become the epicentre of the virus,” he said. “So for sure, that (coming to Canada) is a smart move.”

This report by The Canadian Press was first published July 2, 2020.

Toronto FC forward Ifunanyachi Achara (99) gestures to fans as he is taken out of the game during the last minutes second half MLS action against New York City FC in Toronto on Saturday March 7, 2020. Toronto FC suffered a blow on the eve of flying to Florida for the MLS is Back Tournament with news that Ifunanyachi Achara is out for the remainder of the season with a knee injury.THE CANADIAN PRESS/Chris Young