Kevin Payne, who led D.C. United to glory and was Toronto FC's first president, dies at 69 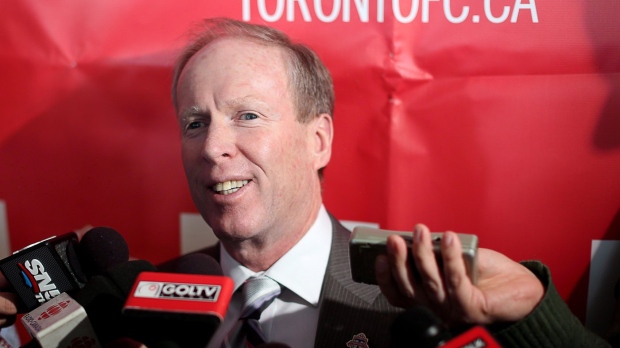 In this file photo, Toronto FC President Kevin Payne talks with the media during the team's media open day at the club's training complex in Toronto on Tuesday January 22, 2013. THE CANADIAN PRESS/Chris Young

Kevin Payne, who helped D.C. United become Major League Soccer's first dynasty and went on to serve as president of Toronto FC, has died. He was 69.

The Washington Post reported that Payne died Sunday in Charleston, S.C., from a lung illness.

The longtime soccer executive was inducted into the U.S. National Soccer Hall of Fame as a builder in 2021.

“Kevin cared deeply about this sport and the people involved in it,” said Djorn Buchholz, executive director of the National Soccer Hall of Fame. “His passion will be irreplaceable. We will miss him and we will make sure his legacy will not be forgotten.”

“Kevin was instrumental in the formation of the league and helped build D.C. United into the first MLS dynasty - winning three of the first four MLS Cup championships,” Garber said in a statement. “D.C. United remains one of the most successful teams in league history.”

“Kevin worked tirelessly for decades to grow the game in our country and his work has left a lasting impact,” added U.S. Soccer president Cindy Parlow Cone. “His legacy and contributions changed our game at all levels, and he will be remembered fondly as a friend and colleague.”

Payne helped D.C. United find its feet in time for the debut MLS season in 1996. In its first four years of operation, D.C. United won three MLS Cups and was runner-up the other year. His team won 47 league games in its first two seasons.

He then returned to D.C. United as president and CEO from 2004-12 before becoming president of Toronto.

In coming to Toronto in November 2012, Payne joined a franchise that had failed to make the playoffs since its inception in 2007, winning just 45 games over those six seasons.

He said he relished the challenge.

“I personally love a challenge,” he said at the time. “I often talk with people and say 'What's the fun of being the manager of Real Madrid and spending crazy money and just buying the best players?'

“I really love to build things.”

At the time, Earl Cochrane was TFC's director of team and player operations. Cochrane is now general secretary of Canada Soccer.

Payne routinely wore one of his four MLS championship rings. But he wasn't going to wear one to his TFC introduction until wife Pam changed his mind.

“I said to my wife this is weird. For the first time since '97 - when I got the '96 ring - I'm not going to put on a championship ring,” he said after being unveiled as Toronto's president and general manager.

“And she said 'I think you should put it on.' I said 'Well, I don't want to be always talking about D.C.' She said 'But you need to get people to aspire to win their own ring. Understand that that's the goal.'

Payne wore his 2004 championship ring to the news conference at BMO Field.

“We found the right guy,” said Tom Anselmi, then president and COO of Maple Leaf Sports and Entertainment.

The dismal showing in 2012 prompted MLSE to roll back 2013 season-ticket prices to that of the club's inaugural year in 2007.

Payne turned heads before the 2013 season when he said he was disappointed at the fitness level of “a number of players.”

Payne took a scalpel to the cap, shedding players while dealing to acquire allocation money to increase their resources. But the losing continued and Payne and Cochrane were gone in September 2013 as new MLSE boss Tim Leiweke cleaned house.

Born March 5, 1953, Payne played soccer in college and at the semi-pro level. After starting his career as a radio journalist in New York City and as a special events executive in Vail, Colo., Payne turned to the business side of soccer in 1989 when he was hired as U.S. Soccer's national administrator.

Payne was named CEO and executive director of US Club Soccer in January 2015 and remained in the position until he retired on Dec. 31, 2021.

Payne was a member of the MLS board of governors and its competition committee for the league's first 18 years, a U.S. Soccer board member from 1994 to 2004 and was vice-chairman of the U.S. Soccer Foundation.

He also served on the FIFA Global Committee for Club Football from 2009 to 2012. In 2011, Payne was awarded the prestigious Werner Fricker Builder Award by U.S. Soccer for his outstanding work in the sport.

He also was honoured for his contributions to D.C. United as he was inducted into its Hall of Tradition in October 2015.

This report by The Canadian Press was first published Dec. 25, 2022.