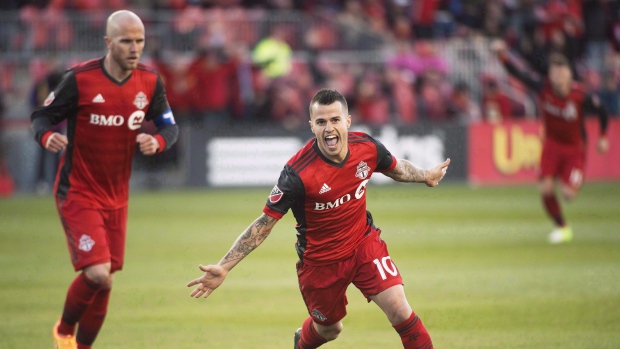 Toronto FC forward Sebastian Giovinco (10) celebrates his goal against Orlando City SC as midfielder Michael Bradley (4) looks on during first half MLS soccer action in Toronto on Wednesday, May 3, 2017. Amidst reports that a transfer was in the works, star striker Giovinco left Toronto FC's California training camp on Monday. THE CANADIAN PRESS/Nathan Denette

TORONTO - Amidst reports that a transfer was in the works, star striker Sebastian Giovinco left Toronto FC's California training camp on Monday.

But a club spokesman said the absence was health-related.

The TFC representative said the agent for the Italian international, who turned 32 on Saturday, asked to take Giovinco to a doctor in Los Angeles “to evaluate some leg tension he's been experiencing.”

The club said Giovinco was expected back with the team Monday afternoon. TFC is training at the University of California, Irvine.

Asked Monday evening if Giovinco was back in camp yet, a team spokesman said he was still in Los Angeles and that the team had been given the afternoon off.

Giovinco, a former MLS MVP who was Major League Soccer's highest-paid player last season at US$7.115 million, is in the final year of his contract with Toronto.

As to reports of a possible move, the club spokesman offered a generic response: “We get lots of inquiries and always review (them), but the club has not received any formal offers (for Giovinco).”

More football rumours? Or is this a case of where there's smoke, there's fire?

Giovinco has consistently said he wanted to stay in Toronto but made it clear he wanted to get his future sorted out as soon as possible.

“I try to honour my contract,” the Italian told reporters in English at the first media availability at training camp in Toronto. “We'll see what happens. I want to stay here but I hear something already this season (that) somebody wants to offer me to another team.”

He declined further comment on the offer, which he called “serious talk.” The club responded later in the day saying it had not received any offers for Giovinco.

New GM Ali Curtis and the Toronto braintrust have to decide whether it is worth bringing Giovinco back - and whether it can be done at a price that suits them - or whether it is time to cash in on the Italian knowing he can leave for free when his contract expires.

Money has not been an issue in the past with deep-pocketed Maple Leaf Sports & Entertainment.

For his part, Giovinco believes he has another six years playing ahead of him.

At the moment, Toronto's forward ranks are thin beyond Giovinco and fellow designated player Jozy Altidore, whose contract also expires at the end of the 2019 season.

The only other forwards under contract are 19-year-old Ayo Akinola and 22-year-olds Jon Bakero and Jordan Hamilton.

Toronto does hold first position in the MLS allocation order, setting the stage for a player acquisition.

MLS uses the allocation process as its way of acquiring select U.S. internationals, elite youth U.S. internationals or former MLS players returning to the league after joining a non-MLS club for a transfer fee greater than $500,000.

Toronto used it to acquire former MLS defender of the year Laurent Ciman after he left France's Dijon.

But Giovinco will be near impossible to replace.

In four seasons with Toronto, Giovinco has 68 goals and 52 assists in 114 regular-season games (111 starts). He won MVP honours in his debut 2015 season, when he was directly involved in 65 per cent of Toronto's 58 goals with 22 goals and 16 assists.

TFC made the playoffs for the first time that year, reached the MLS Cup final in 2016 and won it all in 2017, capturing the MLS championship, Supporters' Shield and Canadian Championship.

At his best, Giovinco terrorized bigger defenders whose only resort was often to body him to the ground. And if they did that near goal, he could make them pay with a deadly set piece.

Last season, he had 13 goals and 15 assists in 28 games as Toronto suffered through a down year.