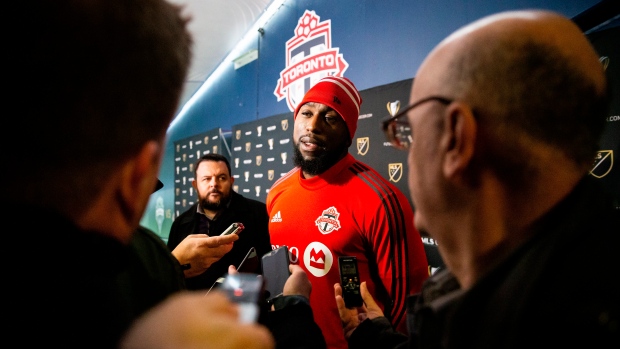 SEATTLE - Jozy Altidore, sidelined earlier in the playoffs by a quad strain, was on the Toronto FC bench for the start of Sunday's MLS Cup final against the Seattle Sounders.

Centre back Omar Gonzalez, meanwhile, was back in the TFC starting lineup for the first time in the playoffs after recovering fully from a hamstring issue. Laurent Ciman, who had filled in for him admirably in the first three post-season games, reverted to the bench.

That meant no place for veteran defender Drew Moor in the game-day 18.

Altidore's status had been a major storyline leading up to the championship game.

The burly striker last played Oct. 6 in the regular-season finale against Columbus. He exited gingerly in the 70th minute of that game after crashing into the turf when he stumbled over sliding Columbus defender Jonathan Mensah as he attempted a shot.

Altidore had said Monday it would take “a little bit of a miracle to be out there on Sunday.”

To which coach Greg Vanney said: “I believe in miracles.”

“It's a big game. It's going to take a lot to keep anybody out of it,” he added.

Altidore sounded more positive about his participation prior to training Saturday at CenturyLink Field.

Pozuelo led Toronto with 12 goals during the regular season, one more than Altidore.

Gonzalez had also been a question-mark. He missed the Oct. 19 first-round playoff game against D.C. United with a hamstring problem, dressing but not seeing action in the next two games.

Ciman, like Gonzalez a former MLS defender of the year, stepped in for Gonzalez as coach Greg Vanney fielded the same lineup for three straight playoff games.

“For me it's a good thing to have guys on top of their game and to have options,” Vanney said Saturday. “That's a choice I have to make as a coach.

“He's too big of a player. It is a final. I'm sure he'll be involved in some way, shape or form.”

Torres, who had been dealing with a hamstring strain, saw two minutes action off the bench in the Western Conference final against Los Angeles FC.

Torres and Arreaga have battled for playing time alongside South Korean Kim Kee-hee since Chad Marshall retired in May due to injury. Torres served a 10-game suspension earlier in the season after testing positive for a performance-enhancing drug.

The 33-year-old Torres has big-game experience. He converted the decisive spot kick in Seattle's penalty shootout win in the 2016 MLS Cup final. And he sent Panama to the World Cup for the first time with the winning goal in a 2-1 decision over Costa Rica in October 2017.

The 25-year-old Arreaga, one of Seattle's designated players along with Nicolas Lodeiro and Raul Ruidiaz, is in his first year in MLS.