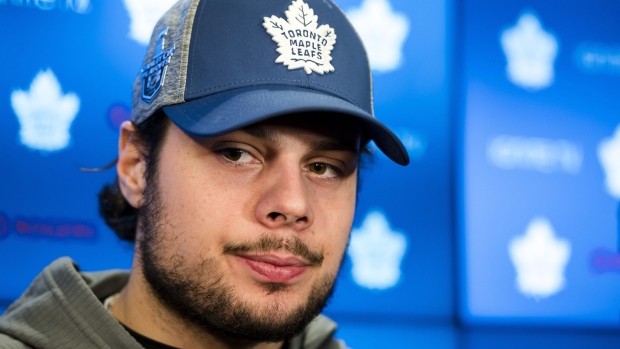 Toronto Maple Leafs centre Auston Matthews speaks to reporters after a locker clean out at the Scotiabank Arena in Toronto, on Thursday, April 25, 2019. THE CANADIAN PRESS/Christopher Katsarov

Watching the NBA Finals and the Toronto Raptors' parade from his home in Arizona, Maple Leafs star forward Auston Matthews couldn't help but think about what it would be like if his team managed to win a championship.

“I think for us as players, it's a little extra motivation for next season just to see what could be if we end up accomplishing that ultimate goal,” Matthews said Wednesday.

Some of Matthews' teammates watched from a private box at Scotiabank Arena as the Raptors played the Golden State Warriors in the NBA championship. Toronto needed six games to complete the victory, wrapping up the series last Thursday in Oakland, Calif.

An estimated two million fans turned out for a parade and rally outside city hall on Monday.

“Obviously to see the excitement, the madness, the streets the night they won it, the parade and everything, it was just craziness,” Matthews told The Canadian Press from Las Vegas. “It was awesome to see. I mean the city was on fire for just the whole entire playoffs.”

The Maple Leafs (46-28-8) had a 100-point season but fell to Boston in a seven-game first-round series. The Bruins went on to win the Eastern Conference title before falling to the St. Louis Blues in the league final.

“You just can't imagine what it would be like,” Matthews said. “It was just amazing, you saw the support (for the Raptors). People were getting out of their cars on the freeway to take in the parade ... it's hard to put into words really.”

The Maple Leafs' off-season rumour mill has kicked into gear with the draft and free agency fast approaching. Defenceman Nikita Zaitsev has requested a trade and there has been plenty of scuttlebutt regarding forward Patrick Marleau's future as well as contract talks with star forward Mitch Marner.

Matthews said he doesn't focus too much on the off-season developments, although he noted it can be hard to avoid on social media.

“I'm not in those conversations so I don't really know exactly what's going on,” he said. “But as far as that stuff goes, you just hope it obviously gets resolved whether it's Mitch's contract or whatever. I think we have a lot of faith in the management and the staff obviously to get stuff done, whatever it is.

“I think just put your faith in those guys that they'll do what's best for the team and go from there.”