Young issued a letter to Hamilton mayor Fred Eisenberger and members of city council Monday, saying he was withdrawing his support of a proposed stadium project. The move leaves the CFL club with no place to play after its lease at aging Ivor Wynne Stadium runs out in 2011.

The new stadium will be used for the 2015 Pan Am Games and was to be the Ticats new home afterwards.

But after months of controversial negotiations over the facility's location, Young says he has had enough.

"It saddens me to advise you that the Hamilton Tiger-Cats football club is withdrawing from any further discussions and negotiations pertaining to the siting of the Pan Am Stadium in Hamilton," Young wrote.

While he didn't divulge his future plans, Young hinted that the team could move elsewhere.

"We will play out our days at Ivor Wynne," Young wrote. "My major regret is the harsh reality that after next year, there will be no home for Hamilton Tiger-Cats in the city where we shared so much success and positive experiences together."

Young and civic officials had been at odds over the location of the stadium in recent months. Local politicians wanted the facility to be located closer to the downtown core while Young favoured the east mountain area of the city.

Young had promised $15 million toward the east mountain site with an additional $59 million if the CFL club managed the stadium.

City council was expected to debate the issue Tuesday before deciding between the two sites.

The Ticats said neither Young nor president Scott Mitchell would be available for further comment on the issue.

CFL spokesman Jamie Dykstra said the league will continue to work with the Ticats to find a solution to the stadium issue.

"The Tiger­-Cats announcement will be received with great disappointment by many and we know that this is a difficult time," Troop said in a statement. "Toronto 2015 hopes that Hamilton council can proceed with thoughtful deliberation on the stadium.

"We look forward to the city's decision this week."

But with no other viable venues to move into, Young's decision creates questions about the Ticats' future in Hamilton. Adding fuel to that fire is Hamilton councillor Sam Merulla telling The Canadian Press he's been told the CFL club has a $17-million deal to potentially move to Quebec City.

There was also speculation Young, a Hamilton native, could sell his franchise to the group that has been awarded a conditional expansion team for the city of Ottawa. But a CFL source said Monday night there are no indications any relocation deals have been reached.

The source added Young's top priority has been finding a viable new stadium in Hamilton that could help secure the franchise's long-term future, though now moving the team could be an option.

Merulla also said he was surprised by Young's decision to withdraw from the stadium project.

"I have a great deal of respect for Mr. Young and this comes to me as a shocker."

Merulla said the city of Hamilton subsidizes the Ticats to the tune of $1.3 million annually while charging the CFL club just $27,000 to play its games at Ivor Wynne Stadium. Merulla added that the Hamilton franchise gets to keep all revenues it generates at the facility from television, advertising and concessions.

But it would be difficult for the Ticats to simply pick up stakes and leave for Quebec City once its stadium lease expires.

Young would require CFL board approval to relocate the franchise, which could be tough given the success Robert Wetenhall has enjoyed owning the Grey Cup-champion Montreal Alouettes. Two other big issues would be the lack of a 25,000-seat stadium in Quebec City as well as going head-to-head with the Laval Rouge et Or, one of Canadian university football's most successful and best-run programs. 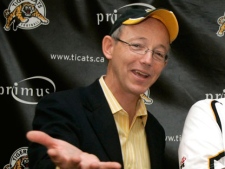 Hamilton Tiger-Cats owner Bob Young, is shown in Hamilton, Ont., on Aug.29, 2006. Young is backing out of negotations to build a new stadium in Hamilton.Plans are for the facility to host the 2015 Pan Am Games before becoming the new home for the Ticats. (THE CANADIAN PRESS/Nathan Denette)