Top pop acts struggle to stay alive in the charts

"My Beautiful Dark Twisted Fantasy" had so much going for it: impossibly immaculate reviews, an astonishing "Saturday Night Live" appearance and three top 25 advance hits. Of course, it was also the work of one of the biggest pop stars in the world, one whose every whisper inspired an avalanche of press (though he rarely whispered).

Of course, the album opened at No. 1 on the charts in its first week of sales, and it went on to stay there for ... well, it didn't, actually.

Neither did Katy Perry's much-hyped "Teenage Dream," which was also No. 1 for exactly one week. Those albums joined a long list of one-week wonders that also included Drake's "Thank Me Later," Usher's "Raymond v. Raymond" and Sugarland's "The Incredible Machine."

2011 promises new albums from a bevy of pop music's most glittering stars: Lady Gaga, Lil Wayne, U2, as well as a joint release from Kanye West & Jay-Z.

But expecting any of those artists to dominate the charts for any extended period of time might be folly. No, these are the days in which -- to entirely misquote West himself -- no one man (or woman) should have all that power.

"The business has become quite disposable," said hit-making producer David Foster in a recent interview. "I don't think record companies are into building artists anymore. They're just into having that disposable hit.

"That's why albums don't stay No. 1 for long anymore. It's bang! And then they're gone."

Indeed, the days of prolonged chart domination seem to have long passed.

In 2010? A grand total of 31 albums hit No. 1 in the U.S. Canadian audiences were only slightly less fickle, with 29 different albums claiming top spot north of the border.

In the increasingly fragmented music industry, many artists can only hope to share a sliver of the spotlight for that first week of an album's release. Aside from a few notable exceptions, albums disappear quickly from view after that, cast aside for the next week's brand-new blockbuster.

Whether it's indicative of a lack of quality albums, of the wandering ear of the music-listening public or of a failure on the part of the industry to patiently build up artists who can maintain an audience's attention, the lack of staying power in modern music is a troubling trend for many observers.

"When my stepchildren listen to a song and we're in the car, and I love the song, and I go: 'Who is that?' They have no idea who it is," Foster said. "They just love the song. They really don't zero in on the artist.

"I mean, yes, Lady Gaga breaks through and Beyonce broke through, and the Black Eyed Peas. But by and large, there's records where they don't know anything about the artist. They just like the song.

As far as some are concerned, it's a question of quality.

According to Billboard's year-end Hot 100, only Ke$ha managed to place four singles in the Top 50 in Canada. Lady Gaga and Timbaland each had three, while a cluster of other artists had two each.

Few albums released these days feature enough hit singles to sustain chart momentum over a period of months, and part of the reason for that is that many pop albums are lucky to contain even two potential hits.

And the exceptions -- like Gaga's "The Fame" and "The Fame Monster," which combined for seven major singles, or Taylor Swift's megahit "Fearless," which contained five radio hits -- tend to have a longer lifespan.

"You really rarely see those albums these days that have five, six singles on them," said senior VP of MuchMTV Group Brad Schwartz.

The other side of this is that it seems increasingly difficult for records to sell slowly at first but hang around. It seems the days when an album could slip into stores quietly before beginning a gradual chart climb are long gone.

Consider the case of Nirvana's "Nevermind." The seminal grunge record opened at the 144th spot on the Billboard chart when it debuted in September 1991. As the disaffected-teen anthem "Smells Like Teen Spirit" became one of MTV's signature videos, the album slowly began its trudge up the charts. It eventually hit No. 1 in January of the following year en route to being certified platinum 10 times over.

Their success story was obviously rare in 1991, but now? It seems close to impossible.

Cee Lo Green had modest expectations for his Gnarls Barkley collaboration with Danger Mouse. The original title of their 2006 debut "St. Elsewhere" was "Who Cares?" a reference to the low sales numbers the duo expected.

It debuted at No. 20 on the Billboard chart upon its release in April 2006. Months later, the record climbed to No. 4, based largely on the strength of the surprise megahit "Crazy." Even without ever topping the charts, the record easily surpassed the platinum mark.

But Green says the reason records typically disappear more quickly from view is a shared apathy on the part of artists and labels alike.

"I don't know if people are that passionate anymore," he said during a recent interview in Toronto. "I believe that making product has become the agenda. And I don't know if it's the artists' fault entirely, because ultimately it does boil down to an executive decision.

Green says labels are increasingly afraid to take risks on artists who either lack a proven pedigree or who want to deviate from what has recently been successful.

"They don't know, man -- they're just like, 'This is cool, it makes sense, it's logical,"' he said. "(They) want to bet their money on the sure thing. But it's only sure if it's rigged, know what I'm saying? ... We don't look at it as art anymore. It's just commerce. And it's not fair to invention."

Of course, record labels were cynically pumping out radio-ready "product" 10 or 20 years ago, too, when pop records had a much healthier lifespan.

Back in 1990, MC Hammer's "Please Hammer, Don't Hurt 'Em" was untouchable for months, staying at No. 1 from June 9 to Nov. 3, interrupted by one week in which New Kids on the Block's "Step by Step" managed to briefly climb to the top.

And in 2000, the most enduring chart hits were 'N Sync's "No Strings Attached" and Eminem's "The Marshall Mathers LP," both of which maintained top spot on the charts for eight consecutive weeks.

But otherwise, many of the albums that managed to remain in view for more than a week or two at a time were directed at an older audience.

Two releases from Scottish singer Susan Boyle ("I Dreamed a Dream" and "The Gift") combined to claim top spot in Canada for four weeks total.

Foster was one of the producers on Michael Buble's "Crazy Love," the fourth best-selling record in Canada in 2010 according to Billboard (with numbers from Nielsen SoundScan), and he produced Andrea Bocelli's "My Christmas," No. 5 on the same list.

"I think the kind of music that I make -- and I've never really wandered from my sweet spot -- just happens to be the last music that's selling: it's the more adult-oriented music," Foster said.

"For such a long time, the adult audience was ignored. Not by me, but by most people. It was all about teens and driving that. Well, teens don't buy records. Adults do."

Certainly, the old measures of an album's success are becoming increasingly outdated.

As expected, purely digital data can skew much younger than Billboard's album charts.

According to iTunes Canada, Eminem's "Recovery" was the top-selling album of the year in Canada, followed by the "Hope for Haiti Now" compilation, Arcade Fire's "Suburbs," Ke$ha's "Animal" and Lady Gaga's "The Fame." The top 10 also featured English folk act "Mumford & Sons," whose success multiplied gradually via word of mouth.

And online music video source Vevo's own Top 10 for 2010 is even more youth-oriented, with the 16-year-old Bieber claiming three spots.

Boyle was nowhere to be found on any of these lists.

And, of course, none of these measures account for illegal downloading, a practice that still tends to skew even younger.

"The whole model needs to change," Schwartz said. "I think if you're just looking at the Billboard charts, someone sells a lot in week one and then it falls off the next day.

"I think people are consuming and engaging with music more than any time in history. Whether they're actually buying a product that charts on a Billboard, I just think that we have to measure the industry differently."

But there are still plenty of people who believe that pop music is becoming increasingly ephemeral.

And yet, some feel that it's not necessarily a bad thing.

"It's the way of the times," said Toronto rapper Kardinal Offishall. "The thing is, people have so much access to music, it's like, once they got it, they're on to the next thing.

"It's like you're a lover of food and you're at this fantastic, five-star, gourmet restaurant. You're not just going to keep getting that one great steak. If everything is made available to you, unless that steak or that lobster is just that good, you're going to try and sample everything because chances are, you're going to find something else that you like in that restaurant.

"So that's kind of how you can look at it with music. We have, now as consumers, access to so many different things. So it's not to where you have your five favourite artists on an LP or a CD that you listen to, you have an iPod that has like 60,000 songs on it, so any given day, you can be into anything.

"And I think it's tough for the artists, but on the other hand, it's good for the consumers because at least you know, then, I think their tastes are more based on what they actually like as opposed to what the media's trying to feed them all the time."

With files from Canadian Press reporter Michael Oliveira in Toronto. 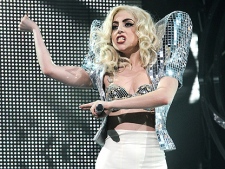