TORONTO - A co-creator of the "Degrassi" TV franchise and a three-term Toronto mayor are among 27 people who'll be receiving the province's highest honour.

The Order of Ontario appointees are chosen for their contributions to the arts, law, science, medicine, history, politics, philanthropy and the environment.

"Degrassi" producer Linda Schuyler, former Toronto mayor David Crombie, politician turned broadcaster John Tory and the other nominees will be invested at a ceremony on Jan. 26.

Lt.-Gov. David Onley says the Order of Ontario recognizes the greatest minds, forward-thinkers, humanitarians, activists and pioneers in the province.

The Order of Ontario was created in 1986 and nominations are made by members of the public. 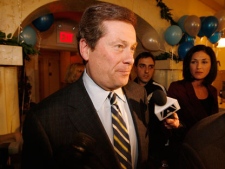