A woman in her 30s is receiving medical care after she was cut by glass that fell from a downtown building late Monday morning.

The incident occurred near Bay and Grenville streets at about 11:40 a.m., Toronto police said.

As she was being loaded into an ambulance, the woman told CTV Toronto's Tamara Cherry that the glass fell directly into her arm.

The woman told CTV that she looked up and "glass was shattering down."

Her injuries aren't believed to be life-threatening.

Police are investigating the circumstances.

This isn't the first time glass has fallen at a construction site in the area.

Twice this summer, panes of glass have fallen near Bay and Grosvenor streets. 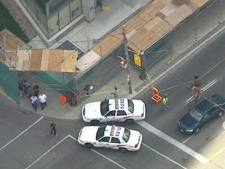 Toronto police cars are seen near Bay and Grenville streets, where a woman was injured by falling glass Monday, Aug. 14, 2011.