Four people have been transported to Humber Region Hospital with non life-threatening injuries following a head-on collision near Finch and Islington Avenue.

The accident happened around 8 p.m.

Police say alcohol and speed have been ruled out as possible factors.

Part of the intersection is closed while police investigate.

A motorcyclist has been struck by a car south of Linton.

According to initial reports, the collision happened at Bells Lake Road and Highway 27.

The rider of the motorcycle is said to be unconscious at the scene.

Plane goes down north of Clarington

UPDATE: One man has been taken to hospital after his plane crash-landed in a farm field east of Toronto Thursday afternoon.

Witnesses told police that one person was on board when the plane crashed, but police are still attempting to verify the information, van Rooy said.

The man has been taken to hospital with serious, but non-life-threatening head injuries, van Rooy said.

Police are still investigation the cause of the incident. Transport Canada has been contacted.

The aircraft is a privately owned replica of a World War II Spitfire.

A man suffered a leg injury after he was hit by a car in downtown Toronto Thursday afternoon.

Toronto police said the man was struck on Queen Street at McCaul Street shortly after 12 p.m.

The man has been transported to hospital with minor injuries.

The driver of the car remained on the scene.

UPDATE: Two people were injured after a collision between a streetcar and a car Thursday afternoon.

Toronto police said the collision occurred on Queens Quay West shortly after 12 p.m. when the streetcar struck the vehicle which was making a u-turn.

Two passengers travelling in the car were hurt as a result.

The driver of the car has been transported to hospital.

All injuries are considered minor. 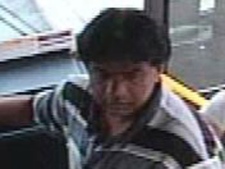 A suspect in alleged sexual assault on a TTC bus is shown.