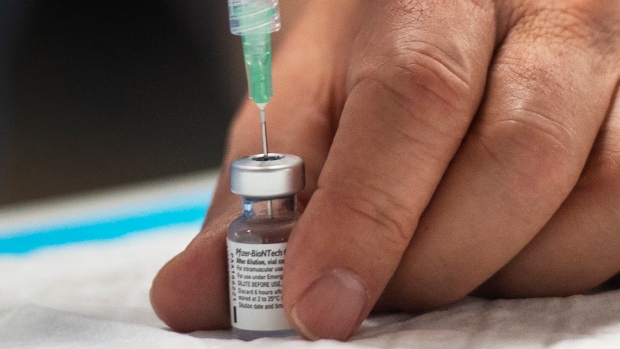 MADRID, May 18 (Reuters) -- A Spanish study on mixing COVID-19 vaccines has found that giving a dose of Pfizer's drug to people who already received a first shot of AstraZeneca vaccine is highly safe and effective, preliminary results showed on Tuesday.

The Combivacs study, run by Spain's state-backed Carlos III Health Institute, found the presence of IgG antibodies in the bloodstream was between 30 and 40 times higher in people who got the follow-up Pfizer shot than in a control group who only received one AstraZeneca dose.

Meanwhile, the presence of neutralizing antibodies rose sevenfold after a Pfizer dose, significantly more than the doubling effect observed after a second AstraZeneca shot.

Around 670 volunteers between the ages of 18-59 who had already received a first dose of AstraZeneca's vaccine participated in the study, with some 450 given a Pfizer dose.

Just 1.7% of the participants reported severe side effects, which were limited to headaches, muscle pain and general malaise, said Dr Magdalena Campins, one of the study's leaders.

"These are not symptoms that can be considered serious," she said.

In a U.K. "mix-and-match" study, first findings recently showed that people vaccinated with a shot of Pfizer's vaccine followed by a dose of AstraZeneca's, or vice versa, were more likely to report mild or moderate symptoms such as headaches or chills than if they received two of the same type. Data on immune responses are expected in the coming months.

Spain embarked on the study to determine how best to proceed after limiting AstraZeneca's shot to people aged over 60 due to concerns about blood clotting in younger people.

That restriction caused widespread uncertainty and meant some younger people who had already received a first dose have been excluded from getting a second.

"Today's results support the possibility of vaccinating patients who have received the first dose from AstraZeneca, but the decision is not up to the investigators of this study," said Jesus Antonio Frias, clinical director at Carlos III.