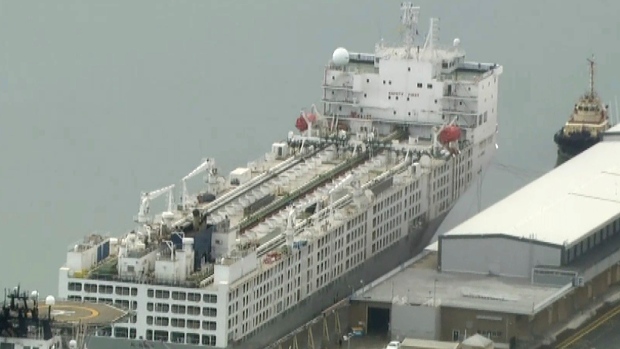 This image from a video shows a freight ship in Fremantle, Australia Tuesday, May 26, 2020. A coronavirus cluster was detected on Tuesday on the ship berthed in the Australian west coast port of Fremantle, raising questions about why local authorities weren’t alerted to the danger. (AuBC/CHANNEL 7/CHANNEL 9 via AP)

CANBERRA, Australia -- A coronavirus cluster was detected Tuesday on a freight ship berthed in the Australian west coast port of Fremantle, raising questions about why local authorities weren't alerted to the danger.

The six infected crew were transferred to hotel quarantine in the nearby city of Perth while health officials consider what to do with the remaining 42 on board, he said.

The ship's cargo of 56,000 sheep is being held at a feedlot near the port. They were to be loaded within days and cannot be returned to farms because of quarantine restrictions, McGowan said.

Authorities expect more crew members will get sick and the ship will need a deep cleaning before it can leave.

The Kuwait-registered ship left the United Arab Emirates on May 7 and was given permission by Australia's Department of Agriculture, Water and Environment last Wednesday to berth at Fremantle despite the vessel's report that three crew members had elevated temperatures, McGowan said.

Australian Border Force gave final approval on Friday for the ship to dock on Fremantle despite the ship's master reporting one crew member running a high temperature and three showing similar symptoms in the previous 15 days, the premier said.

"At this point, the Fremantle Port Authority was not made aware of the health concerns," McGowan told reporters.

A port official followed usual procedure by wearing personal protection equipment and boarding on Friday to help steer the ship into a berth, McGowan said.

The Port Authority did not discover the virus risk until one of its own employees raised the alarm on Sunday, McGowan said.

Western Australian Police Commissioner Chris Dawson said six port workers including the pilot had been on board by then.

McGowan said the pilot has been placed in quarantine. He said no locals should have been allowed on the ship.

"We're very concerned and, to a degree, disappointed, but we're trying to find out who knew what and when so that we can learn lessons from this," McGowan said.

The government is working with the ship's agent to arrange for it to leave as soon as possible, he said.

Two federal government departments did not immediately respond to requests for comment.