The story of Rob Ford appears to be headed for the silver screen and the debate over who will be cast to play the embattled mayor has already begun.

On Monday morning it was announced that Toronto’s Blue Ice Pictures has acquired the film and television rights to the book "Crazy Town: The Rob Ford Story,” instantly kicking off a debate at city hall as councillors, bureaucrats and reporters alike offered their picks for the lead role.

Speaking with CP24, Deputy Mayor Norm Kelly said he would choose Tommy Lee Jones to play himself and John Candy to take up the role of Ford if he was still alive. That selection would seem to make some sense, given that as a former owner of the Toronto Argonauts, Candy, was a football fan much like Ford.

As for the Toronto Star reporter behind the book, Robyn Doolittle told CP24 that she has no idea who she would select for the role now that Philip Seymour Hoffman has passed away.

“Previously when asked this question, I’ve always said Philip Seymour Hoffman. Who knows if he’d have ever done it, but Hoffman would have been perfect to bring this very complicated character to life on the silver screen,” she said in an email to CP24.

The screen version of Doolittle's book will be produced by Daniel Iron and Lance Samuels.

It is not known when the film will be released.

“I was born and raised in Toronto and I have always been a political animal, so to me the story is not a salacious joke about the mayor smoking crack; it is a much bigger story about our city that involves family drama and lots of character,” Iron told CP24 Monday evening.

Iron would not speculate on the style of the production or whether it will be destined for the small screen or the big screen, but he did vow to “adhere closely” to the facts.

Asked for his take on the project, film critic Richard Crouse said he expects a human drama of sorts.

“The people that have snapped this up are pretty serious players, so they are not messing around,” Crouse told CP24 Monday afternoon. “Judging by the other movies these guys have made I’d really expect them to focus on the human drama of this because that’s really what the story is all about. You have to really draw out the humanity of the characters in order for people to really buy in.” 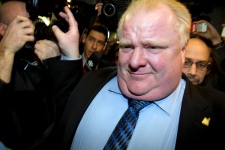