In Somalia, coronavirus goes from fairy tale to nightmare 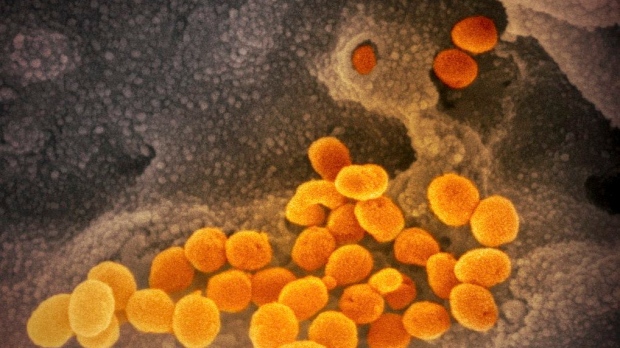 This undated electron microscope image made available by the U.S. National Institutes of Health in February 2020 shows the Novel Coronavirus SARS-CoV-2, orange, emerging from the surface of cells, gray, cultured in the lab. THE CANADIAN PRESS/NIAID-RML via AP

MOGADISHU, Somalia -- At first, the coronavirus was just a fairy tale, a rumour along the dusty lanes of the displaced persons' camp that Habiba Ali calls home.

It seemed fantastical: an illness sweeping the world far beyond Somalia's borders, killing thousands of people and sending some of the richest countries into panic.

Then Somalia's first virus case was announced on March 16, and one of the world's most fragile nations staggered even more. Nearly three decades of conflict, extremist attacks, drought, disease and a devastating outbreak of locusts have taken a vast toll.

"We have been overcome with an extraordinary fear about the disease," Ali said as she worried about her six children. "And we are even avoiding shaking hands with people. Our fear is real, and we are helpless."

Even as mask-wearing health workers entered her Sayidka camp in the capital, Mogadishu, to demonstrate lathering up with soap and water, some authorities shuddered. Small children mimicked the virus prevention measures, happily covering their mouths with their hands.

Somalia also has lacked the capability to test for the new virus, meaning samples are sent abroad and results delayed for more than a week. Quarantine tents have been erected around an old port in Mogadishu. As of Sunday, all international and domestic flights, except for emergency medical and food cargo, have been suspended.

"This is a disease which has overwhelmed more sophisticated health care systems of countries than ours," President Mohamed Abdullahi Mohamed warned in a public awareness campaign.

A third virus case was confirmed in recent days. The person infected is a contractor for the United Nations at the heavily fortified compound at the international airport where many diplomats and aid groups are based.

Somalia's fate depends in part on another, more dangerous authority, the al-Qaida-linked al-Shabab extremist group that controls or holds sway in parts of the central and southern regions.

Al-Shabab often strikes in the heart of the capital, with fighters detonating suicide bombs at checkpoints or infiltrating offices posing as employees. Chances for infection also exist along major roads in Somalia where the group operates a system of forced taxation.

While al-Shabab leaders recently met to discuss the coronavirus as a precaution, the group has been hostile to humanitarian workers during past emergencies. Few people expect anything different now.

"Lessons from previous epidemics, including the cholera outbreak in 2017, tell us that it's unlikely they will allow humanitarian partners access to areas that are in need," the Somalia director for Action Against Hunger, Ahmed Khalif, told the AP. But "they let people seek health care (elsewhere) when they were overwhelmed by the numbers, so we expect a similar reaction."

From his office in Mogadishu where desks have been pushed apart for social distancing, Khalif worries along several lines.

Because of a lack of governance over the years, Somalis have thrived on social networks that are now threatened, he said. The warm personal embraces must end, even though some people mistakenly think Somalia's hot weather will defeat the virus.

And some 6 million Somalis live in squalid conditions, many of them uprooted by past disasters. Most are acutely hungry.

Hundreds of thousands cling to existence on the fringes of Mogadishu, their homes of corrugated metal, even hanging cloth, jammed side-by-side. Access to water is severely limited.

"It's going to be beyond anyone's imagination," Khalif said. "A widespread outbreak of the disease would be catastrophic to the people who are already vulnerable."

The virus doesn't discriminate among rich or poor, he said. Elsewhere in Mogadishu, better-off citizens have rushed to stock up on face masks, sanitizer and gloves.

"Demand is extremely high," Abdulkhadir Muse, a pharmacist, said as shelves emptied. "The problem is that some people are buying and hoarding marks to sell them at a higher price."

Crowds of shoppers mingled in the city of 2.5 million people, some still shaking hands in greeting.

The health system is showing strain. Some hospitals in Mogadishu have turned away people with high fevers, several people told the AP, raising the concern about possible stigma that those infected with the virus might face. They spoke on condition of anonymity out of concern about that stigma.

"If confirmed, such practices could further discourage patients from coming out and seeking medical attention," said Dr. Ali Hassan, an internal specialist.

Across town, deep in the Sayidka camp, resident Yusuf Ibrahim contemplated being uprooted yet again. Drought forced him from home three years ago.

"As displaced people, we are vulnerable," he said. "If this disease spreads between us, we will suffer."