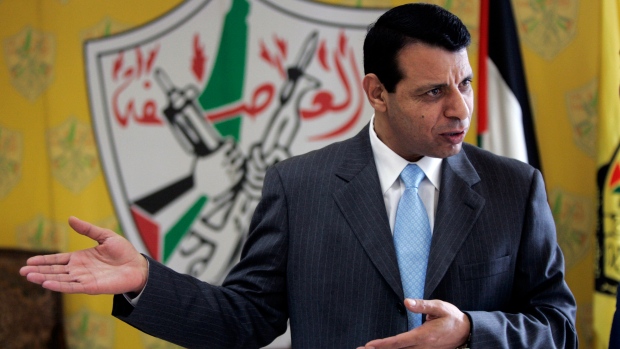 In this Jan. 3, 2011 file photo, Mohammed Dahlan speaks during an interview at his office in the West Bank city of Ramallah. (AP Photo/Majdi Mohammed, File)

RAMALLAH, Palestinian Territory - Palestinian security forces have detained dozens of supporters of a rival to President Mahmoud Abbas who is based in the United Arab Emirates, his political group said Monday.

Mohammed Dahlan, a former senior Palestinian official who was banished from the West Bank in 2010 after a falling-out with Abbas, has denied any role in the UAE's agreement to normalize ties with Israel, which most Palestinians view as a betrayal of their cause.

Dahlan's political movement said in a statement that dozens of its members have been detained or summoned for questioning by Palestinian security forces in the West Bank in recent days, calling it a “stark violation of the law.”

Dahlan, a former security chief in Gaza, has long been seen as a potential successor to the 84-year-old Abbas. In exile, Dahlan has cultivated close ties with Egypt and the UAE, where he is based.

His forces battled the Islamic militant group Hamas in the months before it seized power in Gaza in 2007, but in recent years he has worked with them to provide aid to the territory, which has been under an Israeli-Egyptian blockade since the takeover.

He has denied having any political aspirations, but the aid has helped him to develop a small base of support in Gaza. The UAE deal has stoked speculation he may stage a return to Palestinian politics.

The decision of the UAE and the small Gulf nation of Bahrain to normalize relations with Israel has upended the longstanding Arab consensus that recognition should only be granted in return for concessions in the peace process, leaving the Palestinians increasingly isolated.

Abbas has seen his popularity drop in recent years as he has failed to end the Israeli occupation, the blockade of Gaza or the internal political split with Hamas. His Palestinian Authority is widely seen as corrupt and dysfunctional. The Palestinians have not held elections since the split with Hamas, and Abbas has not named a successor.