Poles angry over fashion shoot on graves in Ukraine 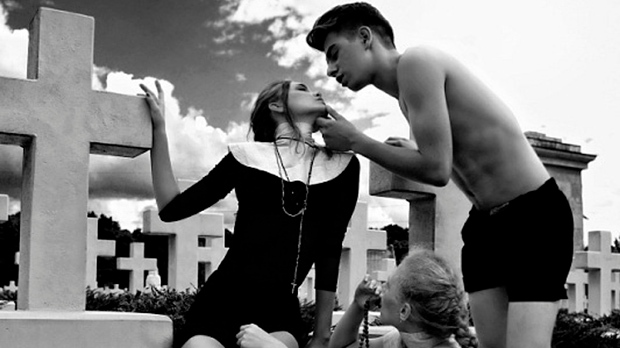 In this photo taken in August 2011, models pose during a photo session next to the graves of Polish soldiers at a cemetery in the Western Ukrainian city of Lviv. (AP Photo/Igor Liashenko, LZ-magazine)

KIEV, Ukraine -- Poland on Thursday protested a Ukrainian photo exhibition featuring models dressed as Catholic nuns posing next to the graves of Polish soldiers, an incident that threatened to upset close ties between the two neighbours as Kyiv relies on Warsaw's help in its push to integrate closer with the European Union.

The protest came during a visit by Polish President Bronislaw Komorowski, who is pressing Ukraine to commit to European democratic and human rights standards if it wants to join the European club.

On Friday, Komorowski and Ukrainian President Viktor Yanukovych are to unveil a memorial outside Kyiv to thousands of Polish officers killed by Josef Stalin's secret police at the start of World War II.

The photographs, taken by a Ukrainian fashion magazine and displayed at a museum last week, showed the women striking provocative poses next to a bare-chested young man and against the backdrop of crosses at a cemetery in the western city of Lviv. The graves are of Polish soldiers who died when Poles and Ukrainians battled for control over Lviv in the wake of World War I.

Poland's Foreign Ministry said Thursday that its diplomats in Lviv protested "the impropriety of the exhibition, which could hurt feelings and provoke controversy" and were able to get the exhibit closed.

"It was horrible, it insults the memory of soldiers, of the state, of everyone," said Emil Legovich, a leader of the Polish community in Lviv. He speculated that the exhibit was organized by certain "political forces" in order to sabotage Polish-Ukrainian relations ahead of Ukraine's hotly contested parliamentary election next month.

Galina Tayan of the LZ online fashion magazine, which organized the photo shoot, said the photographs were meant to illustrate controversies surrounding religion and the church. She denied any political context and said the photos, taken a year ago, were not meant to offend anyone.

Tayan said they chose the Polish section of the large Lviv cemetery simply because they judged the crosses at the Polish graves to be photogenic.

The head of the museum, Iryna Magdysh, said she regretted the decision to display the photos, saying they were offensive.

"Our freedom ends when another person's freedom begins," Magdysh said. "And if these young people want to get PR for themselves using this scandal, we must defend Lviv's honour."

Poland is Ukraine's closest ally among EU nations and has been advocating for Ukraine's integration with the 27-member bloc. Komorowski on Thursday urged Yanukovych to make a choice between aligning with the European Union and shifting closer to Russia.