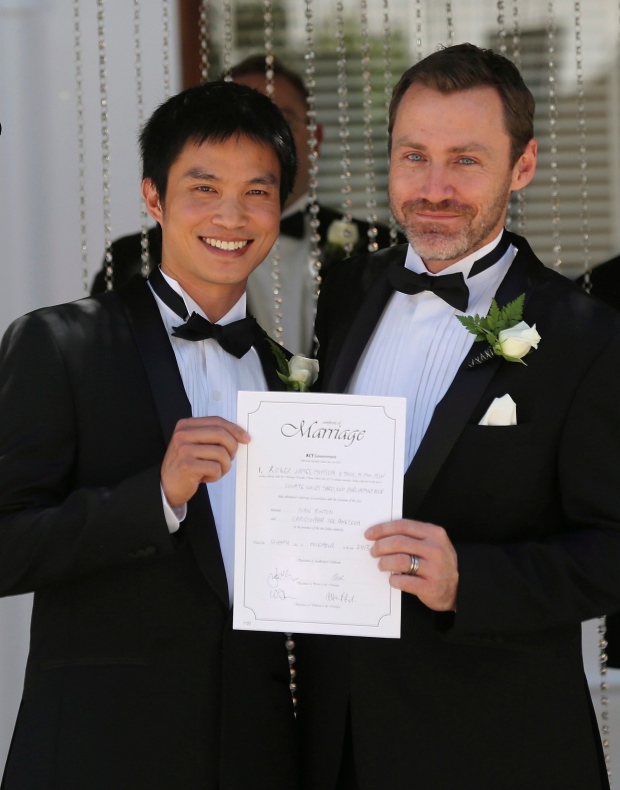 CANBERRA, Australia -- Gay and lesbian couples from around Australia joined in fragile marriages in Canberra on Saturday under the nation's beleaguered same-sex union laws that face a challenge in the courts within a week.

The hastily-arranged ceremonies held under blue summer skies were bitter-sweet occasions for some couples who realize the High Court could annul their unions on Thursday.

The federal government has challenged the validity of the Australian Capital Territory's fledgling law that had made gay marriage legal in Canberra and its surrounds from Saturday.

Bills to change federal law to allow gay marriage were twice rejected by Parliament last year, and Prime Minister Tony Abbott was elected in September on a platform of opposing marriage equality.

Some marriage equality advocates feared that the High Court would block same-sex wedding from Tuesday when it heard the challenge. But no orders were made to impede weekend ceremonies.

If the law survives the High court challenge next week, the Federal Parliament could then overturn it with legislation that would ignite a divisive and bitter debate about human and state rights.

The actual figure could be higher.

"This is the first time that we have been able to demonstrate that the sky will not cave in" due to gay couples marrying in Australia, a tearful Hinton said at his wedding to his Malaysian-born husband Chris Teoh.

Gays and lesbians who married on grassy spaces against the backdrops of Canberra's many symbols of democracy on Saturday said they would be deeply disappointed if the laws failed at the first hurdle next week.

But several said their potentially short-lived unions would remain achievements toward marriage equality.

"Regardless of what happens on Thursday, we still get five days of legally being together," said Stacey Cowan, as she posed for photographs outside Australia's original Parliament House with her new wife, Corrina Peck.

The couple travelled more than 400 kilometres (250 miles) from their coastal home town of Blue Haven for the occasion.

Canberra resident Hayley Wilson said she was glad she did not have to go back to her homeland, New Zealand, to legally marry her Australian wife Samantha Hermes.

"The ball's definitely rolling now and hopefully it builds momentum whatever happens next week," Hermes said.

The Australian Christian Lobby, a vocal opponent of same-sex marriage, warned that the public debate should focus on the plight of children in same-sex relationships.

"We hear about equal love all the time but we don't hear about what it means for children," Shelton told Sky News television.

Gay marriage has legal recognition in 18 countries as well as 16 U.S. states plus the District of Columbia.