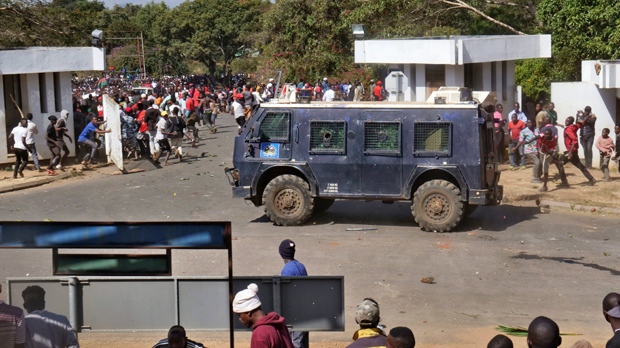 The confrontation in Blantyre occurred as some protesters tore down and burned billboards showing President Peter Mutharika, who narrowly won a second term.

The protesters in this southern African nation have demanded the resignation of Malawi Electoral Commission chairwoman Jane Ansah. A Human Rights Defenders Coalition statement alleged that the commission did not properly deal with more than 140 election-related complaints, and it accused Ansah of a “scandalous approach and stubborn attitude” in managing voters' concerns.

Opposition leaders Lazarus Chakwera and Saulos Chilima, who finished second and third in the election, respectively, joined the protesters in the capital, Lilongwe. Both are challenging the election results in court, alleging irregularities. Also present was former Chief Justice Richard Banda, the husband of former President Joyce Banda.

The protesters in Lilongwe delivered a petition listing grievances to the president's office.

Protesters on Wednesday in Lilongwe scuffled with police as they blocked the road the 78-year-old Mutharika was meant to travel to speak to parliament, forcing his motorcade to use a different route.

The president in response to the weeks of unrest has urged unity and calm while accusing the opposition of “mobilizing illegal demonstrations” and trying to cause chaos after the peaceful election.

In one incident in Lilongwe earlier this month, police used tear gas on Chakwera's Malawi Congress Party headquarters while the opposition leader was meeting with the U.S. ambassador , and some of the gas wafted into the nearby U.S. Embassy. Police later told The Associated Press they had not been aware the ambassador was there.