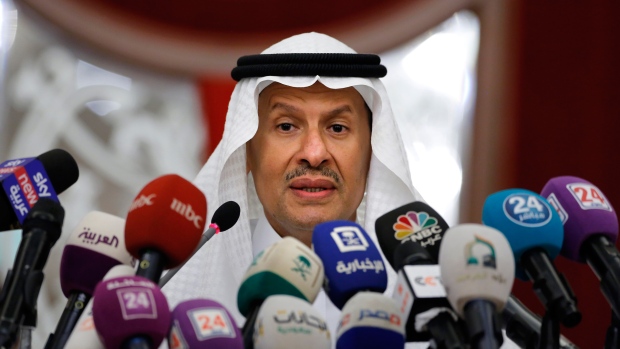 WASHINGTON - The Trump administration tried to balance diplomacy with fresh talk of military action Tuesday in response to the fiery missile and drone attack on the heart of Saudi Arabia's oil industry - a strike marking the most explosive consequence yet of the “maximum pressure” U.S. economic campaign against Iran.

Secretary of State Mike Pompeo was headed to Jiddah in Saudi Arabia to discuss possible responses to what U.S. officials believe was an attack coming from Iranian soil. President Donald Trump said he'd “prefer not” to meet with Iranian President Hassan Rouhani at next week's U.N. session but “I never rule anything out.”

Iran continued to deny involvement in last weekend's attack on Saudi Arabia's Abqaiq oil processing plant and its Khurais oil field, a strike that interrupted the equivalent of about 5% of the world's daily supply. Saudi Arabia's energy minister said Tuesday that more than half of the country's daily crude oil production that was knocked out by the attack had been recovered and production capacity at the targeted plants would be fully restored by the end of the month.

The Trump administration was moving cautiously as it navigated competing impulses - seeking to keep up a pressure campaign aimed at forcing Tehran to negotiate on broader issues with the U.S. while deterring any further Iranian attacks and avoiding another Middle East war. It all was occurring as the administration deals with a host of other foreign policy issues and has no national security adviser, following the recent ouster of John Bolton.

Echoing Trump's warning from earlier in the week, Vice-President Mike Pence said American forces were “locked and loaded” for war if needed. But he also noted that Trump said he doesn't want war with Iran or anyone else.

“As the president said yesterday, it's 'certainly looking like' Iran was behind these attacks,” Pence said. “And our intelligence community at this very hour is working diligently to review the evidence.”

The analysts' task was to connect the dots provided by satellite data and other highly classified intelligence with physical evidence from the scene of the attack, which American-provided Saudi defences had failed to stop.

Fourteen months before voters will decide on Trump's reelection, he is increasingly mindful of his 2016 campaign promises, including his pledge to bring American troops home after nearly two decades of continuous war.

But he also promised to apply fresh pressure on Iran, a pledge complicated by the latest apparent provocation. The at-times divergent messages from his administration, officials say, mirror internal staff divisions and even the president's own hesitations.

“You know, I'm not looking to get into new conflict,” Trump said Monday, “but sometimes you have to.”

“The president's being cautious, and if he were banging the gong today about Iran being the culprit, inevitably, without presenting the case to the American people, everyone would be saying he's a warmonger,” said White House spokesman Hogan Gidley.

The crisis comes amid upheaval in Trump's national security team. His national security adviser, Bolton, departed earlier this month after policy clashes, including disagreements over how best to pressure Iran into returning to the negotiating table on its nuclear and missile programs.

Iran's alleged involvement in a recent series of provocations in the Gulf coincides with key moments in the unraveling of the country's 2015 nuclear deal with world powers, from which Trump unilaterally withdrew the U.S. in May of last year. That was followed by a U.S. economic sanctions campaign, dubbed “maximum pressure,” that has cut off much of Iran's international oil exports.

Iran, in turn, has said that no one will be able to export oil from the region if Tehran can't In effect, the country has answered Trump's economic warfare with its own version -- attacks on economic targets that have been audacious but thus far not caused casualties.

Marine Gen. Joseph Dunford, chairman of the Joint Chiefs of Staff, said Tuesday that U.S. military experts were in Saudi Arabia working with counterparts to “do the forensics on the attack” - gleaning evidence that could help build a convincing case for where the weapons originated.

Speaking to reporters in London, Dunford noted - as Trump had on Monday - that the attack was not aimed at the United States or U.S. forces. Therefore, he said, no steps were being taken to beef up the U.S. military presence in the Gulf region, which includes air defence forces and support troops at Prince Sultan Air Base south of the Saudi capital of Riyadh. The U.S. Navy has an aircraft carrier battle group in the area and fighter and bomber aircraft elsewhere in the Gulf.

A senior administration official said the U.S. sees a role to play for the U.N. Security Council, which was created to address threats to international peace and security. The U.S. believes the attack meets that threshold, but the administration first needs to “gather the releasable” information and intelligence it has collected about the strike, according to the official, who was not authorized to publicly discuss the attacks and spoke only on condition of anonymity. The security council meets next week in New York.

Jon Alterman, director of the Middle East program at the Center for Strategic and International Studies, said Trump must fashion a response to Iran that fits his administration's stated priority of shifting from decades of insurgency warfare in Afghanistan and the Middle East to better position the U.S. for more serious international conflict.

“The military's instinct is increasingly that you can continue to pour resources into confronting Iran, but you're never going to fix the problem and, most importantly, you're taking resources away from confronting the real threats to the United States, which are China and Russia,” he said.

Trump also faces a skeptical Congress. A bipartisan group of House members on Monday called for new language in 2020 defence spending bills that would prevent the president from starting a war with Iran without congressional authorization.

Pence met behind closed doors on Capitol Hill with Senate Republicans, and lawmakers were reviewing classified intelligence about the attack. Some Republican senators said a three-page document shared with Congress is convincing that Iran was behind the attack.

Sen. Ron Johnson, a Wisconsin Republican, said he was “100 per cent convinced” it was Iran.

Sen. Lindsey Graham of South Carolina, a Trump ally, said the president is trying to build a regional coalition before any action.

“I think the appropriate response would be to knock one of the refineries in Iran out of business,” Graham told reporters. He has spoken to the president and expects more information at an “appropriate time.”

Democratic Sen. Tim Kaine of Virginia, a member of the Armed Services Committee, acknowledged the intelligence is “pretty good” that there's an Iran connection, but he warned the Trump administration off a military response.

“The administration is lying to the American people when they say it was an unprovoked attack,” Kaine said, arguing the U.S. imposed sanctions and other withdrawal from the Iran nuclear deal are provoking Iran's behaviour.

In this July 21, 2019 file photo, a speedboat of the Iran's Revolutionary Guard moves around a British-flagged oil tanker, the Stena Impero, which was seized by the Guard, in the Iranian port of Bandar Abbas. (Hasan Shirvani/Mizan News Agency via AP, File)