Conan turns to the Property Brothers for tips on buying Greenland 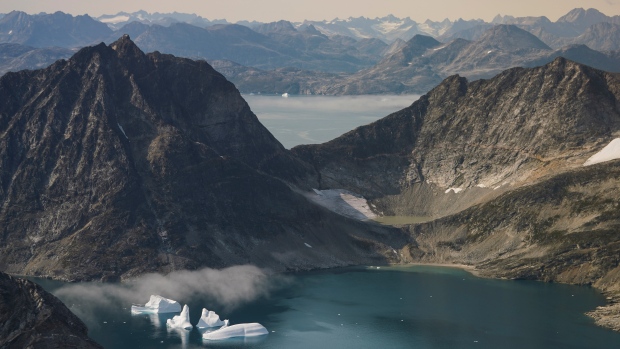 FILE - In this Aug. 14, 2019, file photo, icebergs are photographed from the window of an airplane carrying NASA scientists as they fly on a mission to track melting ice in eastern Greenland. As warmer temperatures cause the ice to retreat the Arctic region is taking on new geopolitical and economic importance, and not just the United States hopes to stake a claim, with Russia, China and others all wanting in. (AP Photo/Mstyslav Chernov, File)

Conan O'Brien has turned to real estate experts the Property Brothers for insight on whether the United States should purchase Greenland.

The B.C.-bred siblings were featured in a late-night bit in which O'Brien expressed support for U.S. President Donald Trump's interest in the resource-rich Nordic region.

In the segment, O'Brien calls HGTV stars Drew and Jonathan Scott to discuss the scheme via video.

The autonomous territory is owned by the Scandinavian country of Denmark. Trump has confirmed reports that he was interested in buying Greenland, an idea that Prime Minister Mette Frederiksen dismissed as "absurd."

In the bit, O'Brien says he would travel to Greenland as part of his "Conan Without Borders" segment to see whether it was worth buying.

A spokesperson for the Property Brothers said Thursday that the twins were not scheduled to appear in more Conan segments but that they were set to appear next year on Apple's "Carpool Karaoke," the streaming spinoff of the popular late-night bit on CBS' "The Late Late Show with James Corden."

The segment was shot recently in Los Angeles alongside sisters and actresses Emily and Zooey Deschanel.

Conan O'Brien has turned to real estate experts the Property Brothers for insight on whether the United States should purchase Greenland. Jonathan, left, and Drew Scott pose for a photo as they promote the new television series "Property Brothers at Home" in Toronto on Tuesday, Nov. 4, 2014. THE CANADIAN PRESS/Chris Young