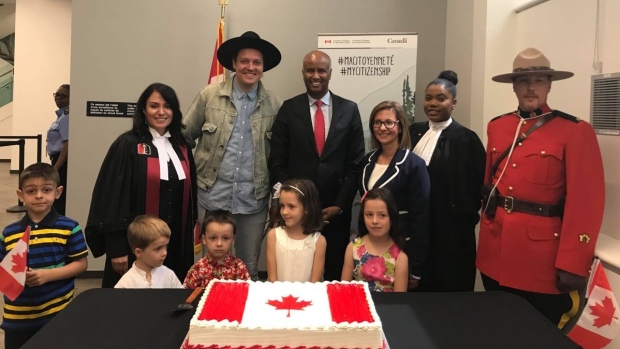 MONTREAL -- Arcade Fire frontman Win Butler says he had to wear a denim "Canadian tuxedo" and assured fans that Mounties are real in a social media post announcing his Canadian citizenship.

Butler says he has lived in Montreal for half of his life so it feels "very natural" to hold both Canadian and American passports.

Citizenship Minister Ahmed Hussen is shown in a second post saying he believes Montrealers have "very much" adopted Butler and he has adopted Montreal.

He says the members of Arcade Fire have made "extraordinary contributions" to a number of humanitarian causes over the years, including supporting health care improvements in Haiti.

Hussen says those efforts have had a long-lasting positive impact not only in that country, but in the larger Haitian community in Canada.

"Very Honored to finally be a Canadian Citizen," Butler said on Instagram Tuesday.

"I've lived in Montreal for half my life, so it feels very natural to have both passports now! Had to wear the Canadian Tuxedo, and yes Mounties are real."

Butler told reporters in March 2018 that he was applying for his Canadian citizenship, after playing a Canadian-accented version of himself on "Saturday Night Live."

He is married to bandmate Regine Chassagne, who was born in Montreal, but wedlock is only part of the qualification for becoming a Canadian citizen.

An applicant must also be physically present in the country for at least 1,095 days within five years, according to the Government of Canada website.

Butler said last year the "international achievement" Juno Award organizers recognized him for "ironically" hindered him from meeting those requirements.

He has evidently overcome that obstacle.