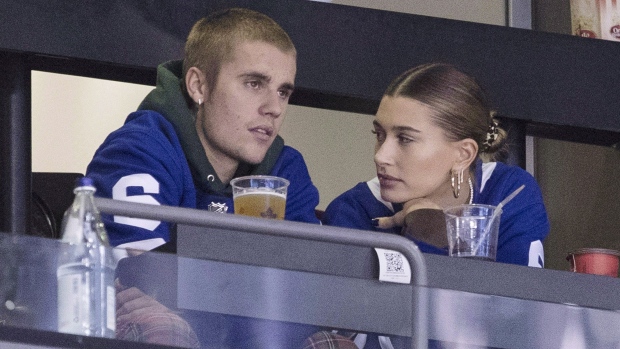 Justin Bieber watches alongside his wife Hailey Baldwin, right, during NHL hockey action between the Philadelphia Flyers and the Toronto Maple Leafs, in Toronto on Saturday, Nov. 24, 2018. (THE CANADIAN PRESS / Chris Young)

LOS ANGELES - Canadian pop star Justin Bieber says in a lengthy Instagram message that his struggles with depression and growing up as a child star led him to make “every bad decision you could have thought of” by the age of 20.

The 25-year-old singer also admits in the post Monday evening that he started doing “pretty heavy drugs” at 19 and “abused all of my relationships.”

Bieber, who is married to American model Hailey Baldwin, says he became distant to everyone who loved him and it took years to bounce back.

The “Sorry” singer opens up about his humble beginnings as the son of two teenage parents in Stratford, Ont., and how all that changed at the age of 13 when his musical talent progressed and he became “ultra successful.”

He says everyone did everything for him during his formative years, adding he never “learned the fundamentals of responsibility.”

“Luckily God blessed me with extraordinary people who love me for me,” he writes. “Now I am navigating the best season of my life: MARRIAGE!”

The pair wed in a courthouse ceremony last year and are planning a religious ceremony sometime this year.

“All this to say even when the odds are against you keep fighting,” Bieber writes.