Ford stands by comments on immigration made during debate

Toronto's mayoral candidate Rob Ford is standing by controversial comments he made on immigration to the city during CP24's mayoral debate on Tuesday night.

Ford came under fire for suggesting that Toronto take care of the people here already, before welcoming more to the city in light of the arrival of nearly 500 Tamil migrants in B.C.

The comments sparked a heated debate among the leading candidates in the race for mayor last night on CP24.

"I have to say I was very shocked when I heard councillor Ford say Toronto should be a refugee-free zone," Smitherman says.

"We can't even take care of our 2.5 million people," says Ford. "I think it's important that we take care of the people now before we start bringing in more."

When each candidate in the debate was asked for a particular platform promises, Ford said he would get rid of city hall's Fair Wage Policy.

On Wednesday, Ford says the attempts to skew his words are simply "spin," and he's not against immigration.

Comments on this page have reached capacity and are now closed. Leave a comment on this additional page. 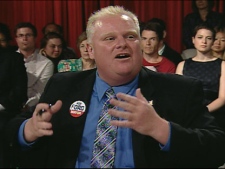