TORONTO - Police action against protesters and bystanders during the tumultuous G20 summit in June has prompted another class-action suit that alleges large-scale breach of rights and illegal detentions.

Named as defendants are the police services boards of Toronto and neighbouring Peel region, along with the attorney general of Canada.

"The policies, procedures, directives and orders of the defendants during the G20 authorized ... abuse of power, abuse of process, false arrest, false imprisonment, infliction of mental suffering, invasion of privacy and abuse of public office," the suit states.

The action has yet to be certified and none of the allegations contained in the statement of claim has been tested or proven.

Named as representative plaintiffs on behalf of about 1,150 class members are two Toronto residents, Miranda McQuade and Mike Barber.

Both were arrested and held at a specially set up detention centre.

The G20 summit was characterized by a mass arrests and detentions after a small group of protesters ran amok, smashing windows and setting fire to police cruisers.

Many of those detained or imprisoned said they had nothing to with the protests but were simply in the wrong place.

Others complained police mistreated them or denied them access to lawyers after they were arrested.

Police and civic politicians have defended the tactics as necessary to protect property and to prevent criminal acts.

Legal and civil-rights groups have all denounced the police action as heavy-handed, arbitrary and illegal.

At one point, police detained a group of people at a downtown intersection -- many passersby and journalists -- keeping them "kettled" in for hours in the pouring rain.

The suit aims to "denunciate the conduct of the authorities" for the violations of civil rights.

It alleges police, acting on orders or policies, assaulted protesters, conducted unreasonable searches and seizures and illegally detained them.

The class would comprise those arrested June 26-27 as a result of G20 as well businesses whose properties were damaged.

The suit points out that none of those arrested was detained inside the security fence set up around the Metro Convention Centre where the world leaders were meeting.

The claim alleges McQuade was protesting peacefully at the Ontario legislature when she was arrested, imprisoned and strip searched.

Similarly, Barber claims he was arrested during a peaceful demonstration.

Hundreds of those arrested and charged -- most with breach of the peace -- were subsequently freed and the charges withdrawn.

Scores of other cases have been grinding through the bail-court system.

Lawyer David Midanik, who is representing the plaintiffs, wants the suit tried in Toronto.

A class-action suit was launched last month seeking $45-million on behalf of more than 800 people who were held without charge.

The suit, filed on Aug. 5 in the Ontario Superior Court of Justice, names the Toronto Police Services Board and the attorney general of Canada. 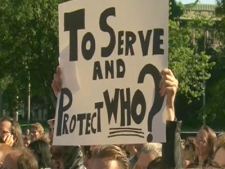 A protester holds up a sign saying 'To Serve and Protect Who?' at a rally on Thursday, July 1, 2010 to demand an inquiry into police conduct during the G20 Summit in Toronto.