Gardiner reopens after six hour shut down due to protest

Up to 2,000 protesters from the Tamil community have completely moved off the Gardiner Expressway more than six hours after their impromptu march onto the highway, crippling traffic in the city on a busy Mother's day Sunday.

Organizers tell CP24 they have spoken with Federal Liberal party leader Michael Ignatieff's office and that he promised to bring up the issue with caucus and look at political and economic sanctions against Sri Lanka.

The protesters say they are satisfied and will move toward Queen's Park where they will rally in support of a man on a week-long hunger strike.

People at a smaller protest at University Avenue and Dundas Street which shut down the intersection are also dispersing and moving toward the legislature.

Police have not laid any charges.

The protesters --including women and children in strollers-- said they would not stop blocking the Gardiner Expressway until they met with a representative from Premier Dalton McGuinty's office and got a promise for a clear course of action to stop the civil war in Sri Lanka. Teenage girls linked arms and stood face to face with police when the demonstration began at about 7 p.m. Sunday.

Earlier in the evening, police Chief Bill Blair said his officers were prepared to work through the night to help clear out the protest. He warned that it could affect the Monday morning rush hour traffic.

There were early reports that protesters assaulted police officers, but Chief Blair would not confirm any injuries. Video exclusive to CP24 showed demonstrators throwing bicycles off the overpass.

He said police were not told the marchers would be moving onto the highway. He said they were working to get the demonstrators off the highway safely but the protesters weren't cooperating. He warned there was a risk of people stampeding.

"Clearly there is a potential for a significant interruption to traffic that may go on for several hours and it could even impact tomorrow's rush hour," he said, calling the protest unlawful and unsafe. "We're going to do everything we can to get them out of there as quickly as possible."

OPP, RCMP and officers from other police forces around the GTA were on hand to help.

The series of protests are in response to what demonstrators call a genocide in Sri Lanka. Toronto has one of the largest Tamil populations outside Sri Lanka.

In addition to the major closure at Spadina Avenue, police had also closed off the Don Valley Parkway due to overflow of cars exiting the Gardiner. CP24's assignment editor Katie Simpson was stuck on the Gardiner and said it took 40 minutes to move less than one kilometre.

It took more than five hours for all the cars that were stuck on the Gardiner to clear out. Police had suggested other drivers to stick to routes north of the city including highways 401, 404 and 427.

"The Tamil people have a right to demonstrate, and there are some very serious things happening in Sri Lanka," Mayor David Miller told CP24. "But you can't endanger public safety," he said.

Protesters told CP24 their move to the highway was impromptu. It is the first time the frequent demonstrators had blocked a major highway in the city.

The Tamil community has staged a number of rallies outside the U.S. consulate on University Avenue over the last few weeks. In one incident, the demonstration lasted four days. Four people were arrested at one on April 29, 2009, but the protests are generally peaceful.

Earlier today police shut down Bay Street between Queen Street and College Street because the protest spilled onto the road. At one point, demonstrators moved along Dundas Street near University Avenue, stalling two streetcars. They continued to move along Spadina Avenue on their way to the Gardiner.

Sunday's rally is in response to reports from a rebel-linked web site that hundreds of civilians have been killed in a massive artillery barrage fired into the northern war zone by Sri Lankan forces.

-With a report from the Associated Press 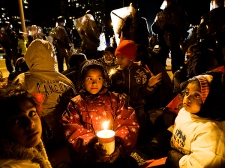 Children sit as police stand in front of Tamil demonstrators after the protestors successfully blocked the Gardiner Expressway in Toronto on Sunday, May 10, 2009. (THE CANADIAN PRESS/Nathan Denette)