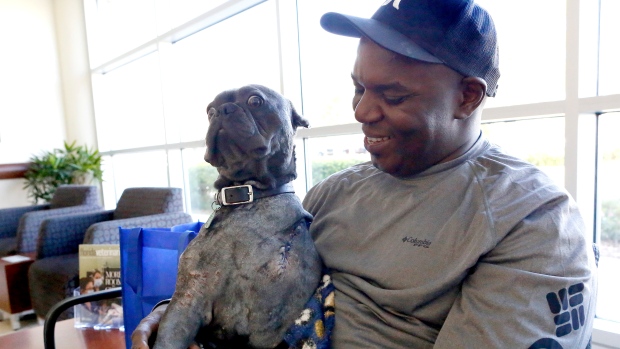 In this Thursday, Jan. 2, 2020 photo, Gerald Ford holds his dog Neo, a French bulldog, at the Small Animal Hospital in Gainesville, Fla. Neo's heart stopped beating following the attack on Christmas Eve. In a rare occurrence, veterinarians at the University of Florida College of Veterinary Medicine were able to revive him. (Brad McClenny/The Gainesville Sun via AP)

GAINESVILLE, Fla. - A Florida man was hoping for a Christmas miracle when his dog was attacked by another animal, and a team of veterinarians provided it.

The heart of Gerald Ford's 1-year-old French bulldog Neo stopped beating following the attack on Christmas Eve. In a rare occurrence, veterinarians at the University of Florida College of Veterinary Medicine were able to revive Neo.

Research suggests that animals whose hearts have given out live full, healthy lives only 5% per cent of the time.

The team of veterinarians who worked on Neo said he will be among them, although he did need a leg to be amputated.

“Typically when an animal passes and comes back, they have to be on a mechanical ventilator, a breathing machine,” Dr. Bobbi Conner, a University of Florida professor and vet specializing in emergency medicine told The Gainesville Sun.

Ford had let Neo outside on Christmas Eve to do his business on his 12-acre property in White Springs, Florida, a rural area between Jacksonville and Tallahassee.

Ford said he found it odd when Neo didn't come back, but he left the front door to his home open a crack so Neo could let himself in. In the middle of the night, Ford said he heard a thud on the front porch and opened the door to see Neo covered in bite marks and losing blood.

Ford said he wasn't sure what animal attacked Neo.

“I'll never forget the look on his face,” Ford said. “It was like he was saying, 'Help me.”

The veterinarians told Ford Neo would adapt to having three legs, and Ford said he has no doubts.