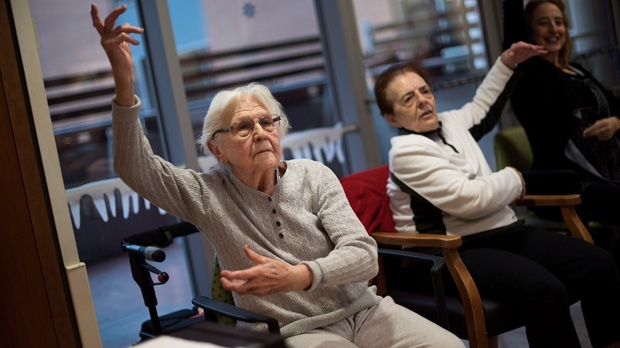 Maria Gorenstein, left, and Louise Rosenberg, centre, who live with dementia, participate in a dance class at Baycrest hospital in Toronto on Tuesday, December 9, 2014. The dance class is a pilot project with Canada's National Ballet School studying the effects of dance on seniors with dementia. (Darren Calabrese/The Canadian Press)

TORONTO -- About a dozen men and women sit around the edges of a spacious room, some perched on chairs, others in wheelchairs, waiting for a special class to begin. A few of these seniors have their eyes closed. Some stare into space. Others have a look of anticipation, as if they're ready for anything.

By the time this 45-minute class at Baycrest Health Sciences in Toronto is over, none will be unmoved or unmoving.

Called Movement to Music, the class is taught by teachers at the National Ballet School to provide seniors with dementia or cognitive impairment an opportunity to listen to music, sing along and engage in dance moves.

They may be seated, but don't tell these aging residents that this isn't dancing.

Led by the teachers, most of the participants stretch out their arms, wave them from side to side, and kick their legs out as a pianist plays tunes from their younger years -- Frank Sinatra's "Fly Me to the Moon," "Take Me Out to the Ball Game" and classical pieces from "The Nutcracker Suite."

As the class proceeds, even those who are more sedentary begin tapping a foot or drumming their fingers in time to the music.

"One thing that we're trying to do is to appeal to their youth and to their history," said Anuschka Roes, head of teacher training at the National Ballet School, noting that the Baycrest residents taking the class range in age from their late 70s to their 90s and beyond.

"So we're trying to appeal to the things that they had as part of their own lives so they can relate to it."

The weekly dance class is a pilot project by Baycrest and the NBS, an outgrowth of another dance program the school pioneered in the last few years for people with Parkinson's disease.

"It was really exciting for us because we were trying to figure out how can we share our love of dance and what we know about dance and how it contributes to people's lives in a broader sense," said Roes.

Melissa Tafler, Baycrest's Arts in Health program co-ordinator, said the dance program is part of a broader strategy of bringing arts of various kinds into the care setting.

"We know that movement bypasses a lot of the verbal areas of the brain and the need for a lot of the cognitive processing," she said. "So we can reach people on a deeper level."

"It's really a non-verbal form of communication. So because of that it's particularly suited to people with dementia because it doesn't require a lot of the cognitive function that is needed for regular communication or interactive talking."

Tafler said the benefits of music alone are well documented, especially for those with varying degrees of cognitive decline, who may suffer from depression, anxiety and behavioural issues that are challenging for caregivers to deal with.

"So that's why we're looking at this particular intervention in the long-term care setting because we know it is an area of health care where it is really difficult to find effective interventions."

Indeed, the ultimate goal is to develop the dance program as a model for other long-term care facilities across the country.

Maria Gorenstein said she watched her daughter perform ballet in Russia before the family moved to Canada more than 40 years ago.

While the 93-year-old doesn't think of herself as a dancer, she enthusiastically followed the teachers' moves, her eyes alight and a huge grin on her face.

"It's very nice, very good," said the former dentist, flashing a near-perfect smile, her Russian accent still noticeable after so many years away from her country of birth.

Roes concedes there are challenges in teaching people with dementia -- because of short-term memory loss, some residents don't remember that they've been to the class before. "In fact, they're pretty sure they've never done anything like this before," she said with laugh.

Moving to the music of their youth can help residents recall happier past times, she added. "That's one of the things that you notice about people with dementia, that sometimes they regress to their childhood.

"That's not necessarily a bad thing. I have one lady who keeps telling me her mother is going to be so excited that she's coming to dance class. That's a happy time in her life and why shouldn't she be reliving that?"

The class also provides residents with an activity unrelated to therapy or treatment, offering a respite from the institutional structure and rhythm of the day.

"So this is something that kind of pushes back against that and allows people to very much organically participate and respond to it in a very open way," Tafler said.

It's also beneficial for staff who accompany residents to the class, she said, pointing out that caring for a person with dementia and often multiple medical problems can be emotionally taxing.

"We see there's a real sharing of experience with staff, who are involved in the program too. They're dancing right alongside the residents, and they seem to get a lot out of it."

"We've heard comments like: 'Oh, this the best part of my day."'

Roes said the best way to gauge the effect of the program is to take mental snapshots of each resident's face at the beginning of the class and at its conclusion.

One woman, who spent much of the class with her eyes closed, came to life with "Fly Me to the Moon," singing the words with a joyous expression on her face, remaining engaged to the end of the class and clapping along with the other residents.

Many of them don't want to leave, said Roes, who confides it's possibly the most uplifting day of her week as well.

For Mari Waisglass, 92, the class is a chance to get together with other people and to have fun.

"I have a ball here. I love everything about it. It's such a wonderful place to be, to have fun and enjoy life," she said.

"After the class I feel good. I always feel good. There's nothing to feel bad about.

"I know I'm not young anymore, and never will be, but it doesn't matter. If you're happy and you're dancing, how can you not feel good?"