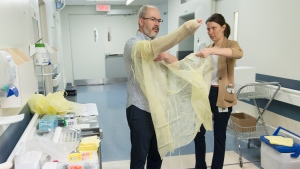 Saturday’s number is a decrease from the 462 cases reported on Friday.

A further 1,336 people are under investigation for possible infection and awaiting test results, officials said.

“In the last 24 hours we’ve processed over 5000 [tests]. Our capacity at this point actually is about 9, 400,” Ontario’s Associate Medical Officer of Health Dr. Barbara Yaffe said at a news conference Saturday afternoon.

Ninety-four Ontario residents have died from the virus since the outbreak reached the province in late January.

Yesterday, epidemiologists released their model for case growth and deaths in the province, saying Ontario is on pace to record 1,600 deaths by the end of April, but adding that could fall to 200 if additional distancing and contact tracing efforts were made.

They project anywhere from 3,000 to 15,000 people will die from infection over the span of the pandemic, which they say could last in some form for as long as two years.

There now has been more than 500 hospitalizations in Ontario due to the virus, with 196 patients admitted to the ICU and 152 attached to a ventilator as of Thursday evening.

Health officials say they have now detected outbreaks of the virus in 36 separate long-term care and nursing homes, and these outbreaks represent approximately 526 infections, and 54 of Ontario’s 94 deaths.