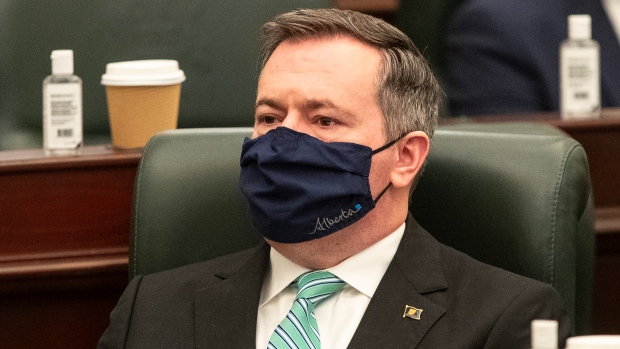 Alberta Premier Jason Kenney listens as the 2021 budget is delivered in Edmonton Alta, on Thursday February 25, 2021. THE CANADIAN PRESS/Jason Franson

EDMONTON - Premier Jason Kenney, with surging COVID-19 case rates threatening to overwhelm Alberta's hospitals, has reintroduced stricter rules on outdoor gatherings, businesses and schools not seen since the first wave of the pandemic.

Kenney said the next three weeks are critical and catastrophe awaits if spread of the novel coronavirus remains unchecked.

“If exponential growth of COVID-19 in Alberta continues, it would begin to push the outer limits of even our surged and expanded hospital capacity within weeks,” said Kenney in a televised address that was also livestreamed on the government's website and the premier's Facebook page Tuesday night.

“We will not permit our health-care system to be overwhelmed. We must not and we will not force our doctors and nurses to decide who gets care and who doesn't.”

For three weeks starting Wednesday, the capacity of retail shops drops to no more than 10 per cent of customer capacity. Outdoor gatherings will be limited to five people instead of 10.

Places of worship will also be limited to 15 people instead of 15 per cent capacity and attendance at funerals is cut in half to 10 people.

All kindergarten to Grade 12 students are to be sent home for two weeks of online learning starting Friday. Thousands of students in higher grades in Edmonton and Calgary have already been working from home.

And beginning Sunday, hair salons, tattoo parlours and nail salons must close. Restaurants, currently only able to serve customers on patios, will be limited to delivery and takeout.

Kenney said there are exceptions for municipalities with fewer than 50 cases per 100,000 people or fewer than 30 active cases.

The announcement came shortly after the federal NDP asked Ottawa to consider invoking the Emergencies Act in response to the crisis in Alberta.

New Democrat Heather McPherson, the MP for Edmonton Strathcona, says in a letter to the speaker of the House of Commons that she will propose an emergency debate Wednesday on the pandemic's third wave that continues to swamp the province.

Alberta has more than 23,000 active COVID-19 infections and has the highest case rate of any jurisdiction in North America. A total of 150 infected people were in intensive care on Tuesday, slightly lower than the record 154 a day earlier.

Earlier Tuesday, dozens of emergency room physicians and specialists said Alberta is on track to double the number of COVID-19 patients in ICUs by month's end.

That would be on top of another 150 patients expected to be in critical care for other ailments.

The doctors said the combined number would be likely to push bed space and staffing beyond capacity and would lead to doctors having to decide which critically ill patients receive life-saving resources.

“It is the constitutional responsibility and the moral duty of the government of Alberta to protect the health and lives of Albertans,” the 48 specialists wrote in an open letter to Kenney.

“Alberta has still not implemented the necessary measures to break the transmission of infection.”

Doctors were briefed last week on triage protocol. It would require them to use resources for patients with “the greatest likelihood of overall survival” but also take into account the amount of resources needed for that to happen.

Gibney said the solution for Kenney's United Conservative government is complex but also simple - especially when it comes to consistent messaging on the threat from COVID-19.

“We need some real leadership now,” Gibney said in an interview.

“It would be a tragedy for large numbers of people to get sick or die at a time when it just isn't necessary and we're so close to getting back to something that looks like normality.”

As of Tuesday, Alberta had 671 people in hospital. Hospitals in Calgary and Edmonton have already cancelled one-third of non-urgent surgeries to free up bed space.

At the height of Alberta's second wave in December, there were more than 900 in hospital, but never as many in intensive care.