Elliott "has the necessary leadership credentials" and the ability to put Ontario on the right track, Baird said, adding he believes she is the only Tory candidate who can win the next provincial election in 2018.

Baird is the 23rd federal member of Parliament to support Elliott, who was married to the late former finance minister Jim Flaherty.

Each stood against the Liberals' proposed changes to the sex education curriculum, the Liberal's Ontario pension plan, wind turbines and a carbon tax, with all three staying away from firm stances on how the Beer Store should be reformed.

McNaughton took a harder line than the two others -- who are widely considered to be the front runners -- slamming Premier "Kathleen Wynne's sex ed agenda," and saying he would tear up wind turbine contracts. Elliott said doing so would undermine Ontario as a destination for business and make the province look like a "banana republic," proposing instead a moratorium on wind turbines.

None of the candidates mentioned the party's proposal in the 2014 election campaign to cut 100,000 public sector jobs by name or number during Wednesday night's debate, but each spoke frequently about the need to listen to party members and not leave policy decisions to small, out-of-touch groups of advisers.

Most Tories admit it was the job cuts proposal that led to the Conservatives' fourth consecutive election loss last June and helped the Liberals win a majority government.

The race to replace former party leader Tim Hudak is down to just three candidates, after both Vic Fedeli and Lisa MacLeod bowed out last week and threw their support behind Elliott.

MacLeod says Baird's surprise decision to retire from politics was a key factor in her decision, though the Ottawa-area MPP says she hasn't yet decided if she will seek Baird's Ottawa West-Nepean federal seat once he officially resigns as an MP.

Brown, the Conservative MP for Barrie, Ont., is the only leadership hopeful who doesn't have a seat in the Ontario legislature.

He was, however, the only one to answer a question in French during the debate. When an audience member asked in French about services for francophones in Ontario, McNaughton said he was in the process of learning French. Elliott, too, said she was learning the language but addressed the gist of the question and added that services also need to be provided in other languages. 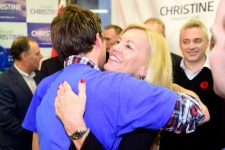 Christine Elliott hugs one hof her sons after announcing her bid to run for the Ontario PC leadership in Toronto on Saturday, Nov. 8, 2014. (The Canadian Press/Frank Gunn)