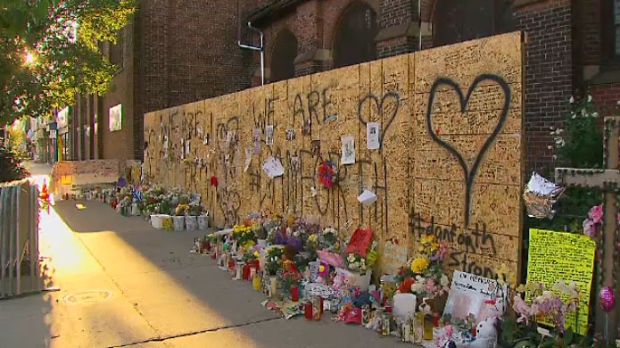 TORONTO - A benefit concert is being held at the Danforth Music Hall to support victims of last month's mass shooting in Toronto's Greektown.

Canadian rock band Billy Talent is headlining the concert along with musicians City and Colour, Pup and Finger Eleven.

Some fans sporting T-shirts from the various bands waited outside the venue more than two hours this evening in advance to see artists perform.

Finger Eleven started off the show following a rendition of Leonard Cohen's “Hallelujah,” a song also performed a day earlier at the opening of the area's Taste of the Danforth Festival.

The fundraiser is being held in the same neighbourhood where 18-year-old Reese Fallon and 10-year-old Julianna Kozis were killed and 13 others were injured on July 22, when a gunman fired into crowded restaurants and patios.

Tickets were around $50 and the venue that seats 1,500 is sold out. Proceeds from the show will be donated to the #TorontoStrong fund.

Hundreds of thousands of people are expected to be in the area this weekend for the Taste of the Danforth Festival, an annual event celebrating the neighbourhood's many restaurants and diverse food and drink offerings.

Justin Trudeau was in Toronto last night to help open the festival. The prime minister began his address by honouring the victims of Friday's shooting in Fredericton. He then offered thanks to the first responders and others who aided the victims of the Toronto shooting.

Jeewan Gill said he bought tickets for the Toronto concert as soon as they became available.

“I'm a big fan of (Billy Talent), they always put together benefit concerts,” said Gill, 26. “It's good to support people that need help because of the shooting.”

Gill moved to Toronto from Vancouver a year ago, and said he's been spending a lot of time on Danforth Avenue checking out its restaurants and music venues.

He noted that tonight's show will be his fifth Billy Talent concert, but he said that given the venue and the cause, this one will be a singular event.

Voula Papadopoulos will also be at the show. She said she and her family and friends are regulars on the Danforth and that the shooting has shaken the community.

“What happened is just unimaginable to happen anywhere. ... Everybody in the community is so friendly, so it hit so hard. It could have happened to any of us.”

“The fact that the guys are putting this on is just amazing on it's own. It's exactly what we need to show, we're not scared, and we will support this, we're not going to back down,” she said.

Billy Talent said in a statement when the fundraiser was announced that the shooting “hit home” as it happened just a few blocks from their studio.

“We want to throw a concert to show the world and more importantly our community that Toronto is a place of love, of community, of kindness and compassion. The violence that has happened here this summer does not represent the majority.”