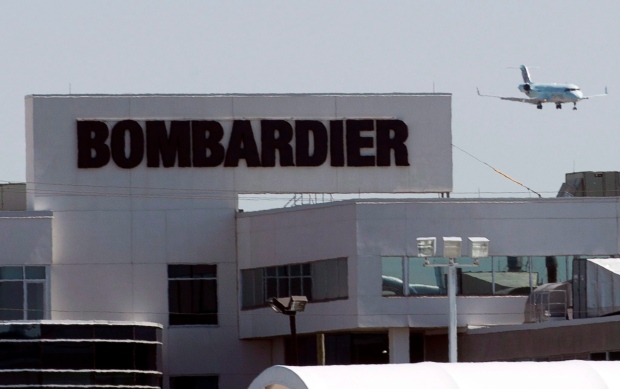 A Challenger jet comes in for a landing past the Bombardier plant in Montreal, Thursday, May 14, 2015. (The Canadian Press/Ryan Remiorz)

MONTREAL -- The $1-billion lifeline Bombardier is getting from the Quebec government will go a long way toward helping the troubled plane and train maker, but it's just one of several initiatives aimed at shoring up the company's financial position, says chief executive Alain Bellemare.

In addition to working on the sale of a minority stake in its railway division (which analysts estimate would bring in US$1 billion to US$2 billion), the company is considering other strategic options, including the sale of non-core assets and exploring ways to trim costs from programs like the Q400 turboprop.

Bellemare was loathe to provide details about what is being considered, including whether joint ventures like the CSeries deal with the province are contemplated for other programs.

The CEO said he's "super sensitive" about discussing options after "very unfortunate leaks" of the company's approach to Airbus about selling a stake in the CSeries.

Reports suggest the company approached the federal government for at least $350 million in assistance. The new Liberal government said it will consider the request after it is sworn into office on Wednesday.

Bombardier (TSX:BBD.B) says it will focus on making its programs more competitive by cutting costs. He pointed to efforts that were rejected by its Toronto unionized employees that would see the manufacture of some parts for the Q400 moved to low-cost countries like Mexico or China.

Although the Q400 does well in North America with customers like WestJet Encore, Porter Airlines and Air Canada, it is too pricey for markets like Asia. Rival ATR dominates while Bombardier's market share is just 25 per cent.

"It's a great aircraft (but) it's too costly and we need to bring the costs down so we can bring the price down," Bellemare said.

And he wouldn't rule out job cuts as the company turns the focus to improving efficiency and operational performance.

"We are going to look at what does make sense to make the business strong moving forward and from that we will derive the conclusion that is needed."

David Chartrand of the International Association of Machinists and Aerospace Workers said cost-cutting and transfer of work to low-cost countries is an unfortunate reality of the aerospace industry.

"Every single program is always under threat," he said, adding that the key is to offset the transfer of work with research and development and higher-value jobs.

Analysts expect Bombardier will have enough cash to fund its programs in the coming few years, but hope to see detailed plans at the Nov. 24 investor day about improving margins.

"Solidifying the CSeries is important, but better margin and cash performance from the other business segments are also critical to support a higher valuation in the stock," wrote Cameron Doerksen of National Bank Financial.

Seth Seifman of JP Morgan called the deal with Quebec a "meaningful" step forward, but only one of many that is required.

He said the key will be getting orders from blue chip customers, including United Airlines, which is reportedly looking at ordering 100-seat aircraft if pilots approve a new contract.

Bombardier shares were up nine cents or 6.77 per cent at $1.42 Friday on the Toronto Stock Exchange.