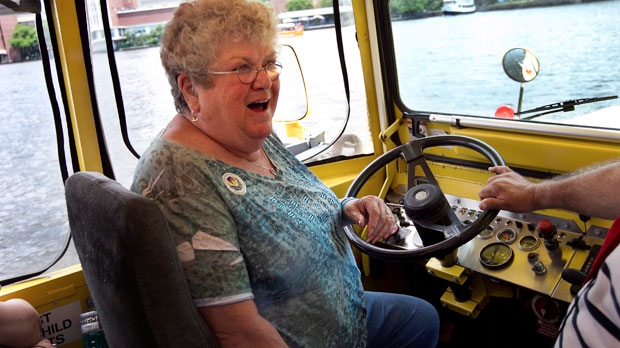 TORONTO -- A Toronto man's campaign to give an American grandmother a vacation from a workplace in which she was tyrannized by teenage bullies ended Tuesday with the retired school bus monitor receiving a cheque for $703,000.

The funds were presented by Max Sidorov, a 25-year-old nutritionist who felt compelled to help Klein after watching a video of her fielding profane taunts and outright threats from a group of middle school students during a bus run last June.

The cellphone video posted online by a fellow student drew millions of viewers. The video shows Klein trying her best to ignore the boys' insults.

One student is heard taunting: "You don't have a family because they all killed themselves because they don't want to be near you." Klein's oldest son killed himself 10 years ago.

Eventually, Klein appears to break down in tears.

The video and what began as a simple campaign to send Klein on holiday brought about much more permanent change, said Sidorov.

"Now her vacation is going to be the full-time vacation of retirement," he said in a telephone interview.

Klein, who had been a bus driver for 20 years before becoming a bus aid for the Greece Athena Middle School, intends to spend at least some of her newly gotten gains on travel, Sidorov said.

She has already celebrated her changed circumstances with trips to Disney World, New York and Boston.

The video of her ordeal touched off an overwhelming outpouring of support.

A spokeswoman for fundraising website Indiegogo, which housed Sidorov's campaign, said Klein's story prompted more than 30,000 people in 84 countries to open their wallets.

Klein has a granddaughter who has Down syndrome and a grandson with autism, and says she plans to donate some of the money to organizations that work with special needs kids.

Sidorov said Klein's grace under pressure was likely a driving factor behind the campaign's popularity, adding the ugly words that prompted the fundraising effort in the first place wound up highlighting the kinder side of human nature.

"These are middle school kids, and they're not just bullying her, they're saying ... some really disgusting things," he said. "But people just want to help others."

Sidorov said he hopes Klein's story will motivate people to keep up the fight against bullying in all forms.

Klein's four teenaged tormentors have been suspended from school for a year, but Sidorov said bullies everywhere need to be stopped.

"It would be great if we could start something more from this," Sidorov said. "We got one person, now we want to help millions."