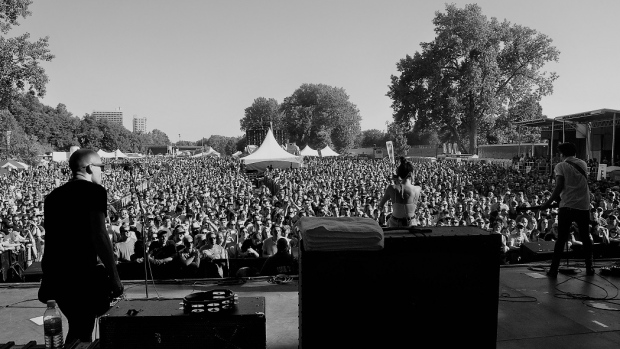 Canadian band July Talk has found a unique venue near Toronto to host a pair of "social distance friendly" performances this summer.

As concerts around the globe are being cancelled due to the COVID-19 pandemic, the band announced this week that it will be performing on Aug. 12 and Aug. 13 "live at a drive-in."

The exact location of the venue has not been released but the band said the concert will be held at a drive-in movie theatre "near Toronto."

"Watch the band perform live from the comfort + safety of your car," a poster advertising the concert read.

It added that a live mix of the music will be broadcasted into vehicles.

SHOW ANNOUNCE :
SAVE THE DATE

we’re over the moon to announce that we’ll be performing live on august 12th + 13th at a Drive-In Movie Theatre near Toronto!

Music festivals around the country have been cancelled this summer due to the crisis, including Canadian Music Week, which was initially supposed to be held at venues around Toronto later this month.

The event was rescheduled for September but organizers later abandoned plans for the festival altogether after suggesting there were too many "unavoidable obstacles" due to the public health emergency.

In a written statement released earlier this month, Neill Dixon, the president of Canadian Music Week, said the pandemic's impact on music events and the music industry in general has been "huge."

"We are hopeful of finding a date in 2021 to continue our nearly four-decade tradition of bringing the world's music to Toronto and Canadian music to the world," he said.