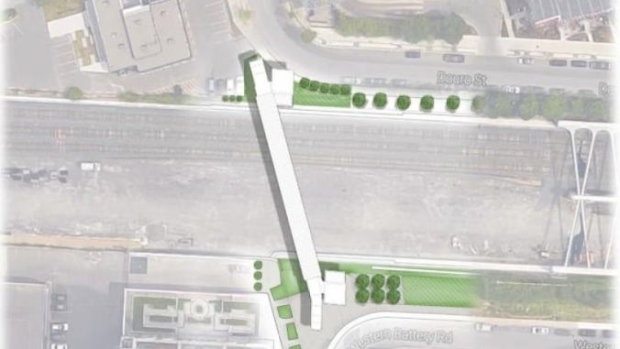 A new pedestrian bridge will be installed in Liberty Village this weekend which the provincial transit agency says will provide direct access to the Exhibition GO station.

Unlike other bridges, the agency said, the bridge “will require two large spans to be matched up while suspended by cranes and then bolted together before being put into place.”

To accommodate the installation, The city says it is closing the rail corridor on Sunday from 2:00 a.m. to 8:30 a.m.

The closure will affect UP express customers.

Metrolinx said GO buses will replace the early morning UP Express trains during the closure.

Replacement buses will run every 20 minutes until train service resumes at 8:30 a.m. During that time buses will not stop at Weston or Bloor Station.

The agency is asking customers to plan and give themselves extra travel time.

“Once complete, the King-Liberty pedestrian cycle bridge will serve as a vital connection accessed between Atlantic Ave. and Strachan Ave,” Metrolinx said.

The bridge is expected to open in the spring of 2020.

The bridge will serve as a vital connection accessed between Atlantic Ave. and Strachan Ave. (Metrolinx)