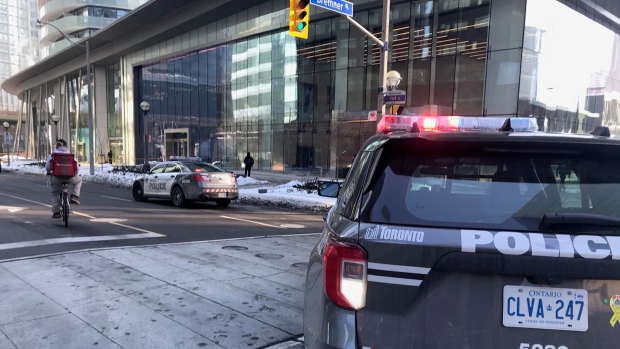 Police have closed downtown street after bottles were thrown from the balcony of a highrise. (CP24/Simon Sheehan)

City officials are now conducting an investigation to determine whether any rules were broken by the owner of a short-term rental unit in a downtown condominium building after bottles were hurled off its balcony during a raucous party over the weekend.

Police had to temporarily close York Street near Lake Shore Boulevard on Sunday afternoon after several liquor bottles were thrown from a balcony belonging to the 35th floor unit.

A total of four people were arrested following the incident and face a number of charges, including assaulting a peace officer with a weapon.

In addition, seven people were also charged with failing to comply with the emergency orders under the Reopening Ontario Act.

In a statement provided to CTV News Toronto on Monday, a city spokesperson said that an investigation is now underway to determine whether the property owner violated any rules attached to a new short-term rental bylaw that came into effect in January.

That bylaw stipulates that anyone renting out a property on short-term rental platforms be registered with the city and adhere to a series of rules, including one forbidding them from renting out any dwelling that is not their primary residence.

“I will just say this. We brought forward and passed those regulations for a reason and that was because there was a misuse of this opportunity to have short term rentals and it was creating areas and neighbourhood where it was just a constant circus parade of people coming through and having parties and disrupting peoples lives’,” Mayor John Tory said during a briefing at city hall on Monday afternoon. “I think it is too early to say whether that enforcement effort has yet been enough as we only moved from education to enforcement early in the New Year. But we are going to be looking at it very closely because these rues are serious and they were out in place for a reason.”

Police have said that the alleged party at the downtown high-rise began on Saturday night and continued into Sunday.

They said that when police arrived on scene they immediately began to block off the street, at which point “they themselves became targets of the bottles that were being thrown from this building."

Addressing the incident on Monday, Tory said it “ranks right up there with Chair Girl as being among the most grossly irresponsible acts we have seen.”

“Fortunately these are just people who are so beyond the scale of irresponsibility it is almost unimaginable and they are few and far between. But the bottom line is there has to be no such parties and we are going to have to take a look at how this fits within the new short-term regulations,” he said.