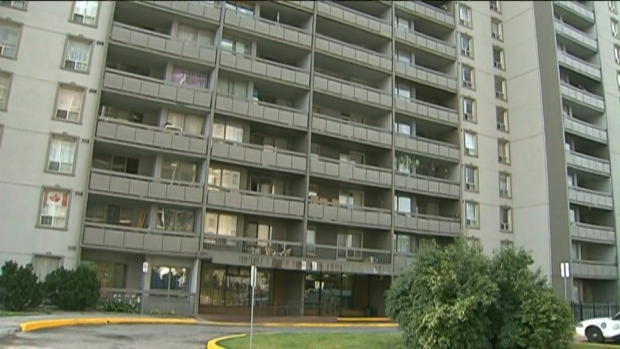 A high-rise apartment building is shown in this file photo.

City council has voted overwhelmingly in favour of a new bylaw that places tougher restrictions on apartment landlords while introducing new protections for tenants.

The bylaw, which council approved by a vote of 44-1 on Wednesday, applies to rental buildings that are three or more storeys and have at least 10 units.

Once the bylaw officially goes into effect on July 1, it will require building owners to have a state of good repair plan and a cleaning plan that details when common areas will be regularly cleaned. The bylaw will also require landlords to inspect indoor and outdoor common areas for the presence of pests at least once a month and to inspect any area for pests within 72 hours of receiving a complaint.

The bylaw also calls on landlords to develop a process for receiving tenant requests and stipulates that they respond to those requests within 7 days or within 24 hours if they are deemed urgent.

The maximum penalty for violating any portion of the bylaw is $100,000.

“I think when it comes to peoples living conditions it is fair that you have a responsible regime, which I think this is, to say to those people (bad landlords) that you are going to adhere to your responsibilities and make sure that tenants are properly looked after,” Mayor John Tory told CP24 following the vote.

Tory said that the bylaw, which also will require landlords to register with the city and pay an annual fee, is simply aimed at cracking down on a small group of bad landlords that are “in the minority.”

Of course not everyone shares his opinion.

The lone councillor to vote against the bylaw called it a “cash-grab” in an interview with CP24 and suggested that the city is overstepping its boundaries.

“Let’s be honest. It is the province that sets out the regulations and guidelines and the City of Toronto really shouldn’t be dealing with this matter at all,” Councillor Giorgio Mammoliti said.

In addition to establishing minimum standards around cleaning and pest control, the bylaw also sets a requirement for licensed contractors to be used and empowers the city to conduct inspections of registered buildings and issue orders for compliance.

The bylaw does no apply to co-operative housing buildings, long-term care facilities or licensed retirement homes.