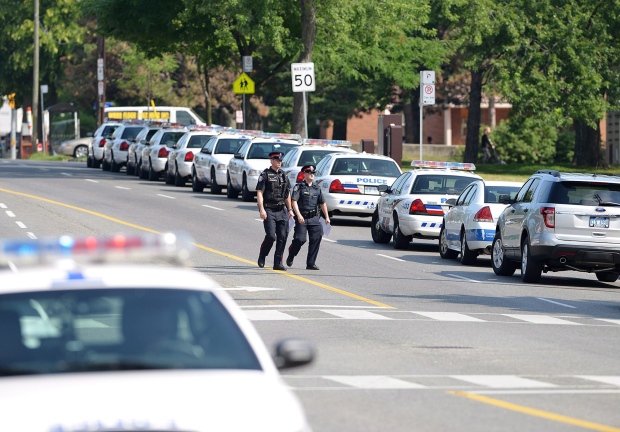 Police cars line the side of Morningside Ave in Toronto on Tuesday July 17, 2012 near the scene of a shooting on Danzig Street where 19 people were injured and 2 confirmed dead at an outdoor barbecue that took place on Monday July 16, 2012. (Aaron Vincent Elkaim/THE CANADIAN PRESS)

A resident of the Scarborough street that experienced a deadly mass shooting three years ago says the community is now “safe” after it received new supports from housing authorities and police.

Rochelle, who lives along Danzig Street in Toronto Community Housing Corporation’s Morningside Coronation Community, said that residents of the area worked to change the atmosphere that lead to a mass shooting that killed two and wounded 22 others.

“We changed it. We implemented different programs, brought the community together with social relationships,” Rochelle said. “It’s a safe community. We want to live together, it’s great.”

This Thursday afternoon, children could be seen playing in an inflatable bounce castle, as music blared from speakers. Older boys played basketball on the street, as several Toronto police officers watched from across the road. Others cooked hot dogs on a barbeque.

Three years ago Thursday, the euphoria of a crowded block party on the street was pierced by bullets, resulting in the death of 23-year-old Joshua Yasay of Ajax and 14-year-old Shyanne Charles of Toronto.

In the immediate aftermath of the tragedy a huge police presence was deployed in the neighbourhood and the number of officers assigned to a community response unit in 43 Division was roughly doubled.

On Thursday, Community Policing Officer Paul Rowe told CP24.com that those changes have “absolutely” helped to change the way residents view the police in the community.

“Certainly our officers in our neighbourhood safety unit report feeling more welcome and report getting more information from residents, which is really the gold standard,” he said. “I have had the opportunity to attend three memorials, including today, and I think every time I go the people are more approachable.”

Rowe, who was on vacation at the time of the Danzig shooting and returned to Toronto to attend Charles’s funeral, said the biggest change in the Danzig community following the shooting was a switch to a more “surgical policing model,” which remains in effect to this day.

Under that model, Rowe says community response officers are working more closely with the community and targeting specific trouble spots as opposed to entire buildings or neighbourhoods.

“If we go up to a high-rise we are not walking all 17 floors anymore. We get information from a particular tenant that there may be prostitution or something on floor 12 and we don’t stop grandma on the way in; we go to floor 12.”

Likwa Nkala of the Toronto East Youth Outreach Workers Network was at the scene three years ago and returned for Thursday’s street party. After the shooting, Nkala said it felt as if the neighbourhood didn’t belong to the residents anymore.

“When this first happened three years ago, you found residents and kids weren’t willing to come on the street. It was sort of like there was an embargo on the area because of all the media trucks and the police. But now you have kids coming out and interacting with the police and having a good time.”

“It is something that is always there — it is part of our psyche as Torontonians — and it is something that changed the way we police,” Toronto Police Association President Mike McCormack said of the tragic shooting. “It changed the way we gather intelligence, do investigations and it really brought the whole issue of gang culture and some of the challenges that we have in policing to the forefront.”

Some residents told CP24 that the increased police presence in the aftermath of the shooting has waned.

Since that night three years ago, Soul-R Maraj, Managing Director of non-profit grassroots organization Impact ’n Communities, said residents chose not to dwell on the sadness that night brought to their community, and worked to make things better.

“They’ve taken direction in terms of different programs, attracting different resources and services to the community. Lack of employment and lack of services are starting to be identified and starting to be rectified.”

Shortly after the shooting occurred, a businessman named Akanimo Udofiya donated $150,000 to start Our Space, a community drop-in centre setup inside a formerly empty, unused townhouse at 230 Danzig Street.

Ward 43 councillor Paul Ainslie says the drop-in centre provides a dazzling array of activities and supports to youth in the area, something residents said the neighbourhood lacked before the shooting.

“There’s an after school homework club, you can even go and get your haircut, with some of the residents learning how to cut hair,” Ainslie said. “It’s an amazing use of an old townhouse here on Danzig.”

Ainslie said the $371 million the city has freed up over the next two years by re-negotiating mortgages of Toronto Community Housing Corporation properties will allow the city to do more for areas such as Danzig Street.

But Nkala said that the Our Space drop-in centre was only granted funding to operate for three years.

“It’s important that when stuff happens, we’re not just reacting, we don’t do a project as a stop gap or a band-aid so we need to have something which is long-term.”