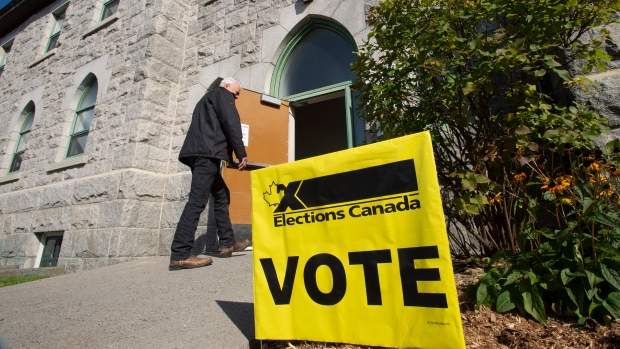 A voter walks in a polling station as the advance vote is opened, Friday, October 11, 2019 in St-Georges Que. THE CANADIAN PRESS/Jacques Boissinot

OTTAWA - Canada's chief electoral officer is asking Parliament to quickly pass a temporary new law to give Elections Canada the tools it needs to conduct a federal election safely in the midst of the COVID-19 pandemic.

Stephane Perrault wants the law to allow for an election to be held over two weekend days, rather than on the usual Monday.

He also wants it to give Elections Canada discretion to decide how to administer the vote safely in long-term care facilities, which have borne the brunt of the more than 9,000 COVID-19 deaths in Canada.

And he wants it to give Elections Canada added flexibility to adapt legally mandated procedures in an emergency situation.

“While the course of the pandemic is uncertain at this time, there is a very real possibility that a general election will take place while the COVID-19 pandemic remains a concern,” Perrault says in a special report to Parliament, tabled Tuesday.

While elections are normally held every four years, the Liberals won only a minority of seats in last fall's election and could be defeated at any time if they lose a confidence vote in the House of Commons.

“With this in mind, I ask Parliament and the government to swiftly consider the contents of this special report and act to assist Elections Canada in preparing for a general election under pandemic conditions.”

Perrault says Elections Canada anticipates three major challenges should it have to administer an election during the pandemic.

Voting would take longer due to limiting the number of voters and poll workers present at polling stations. As well, fewer people would likely be willing to work in polling stations, particularly since typically about two-thirds of election workers are 60 years of age or older, the most vulnerable age group for COVID-19.

And the pandemic would likely make it harder to find available locations for polling stations as some landlords may not want to open their buildings to the public and risk infection. That may be particularly true for schools, churches and community facilities that serve vulnerable groups.

The report suggests spreading the vote out over two weekend days, with polls open for eight hours each day instead of the usual 12 hours on a single day, would help deal with those challenges.

Perrault acknowledges that weekend voting would conflict with days of religious observance for some voters and candidates. But he argues that such people have other options, such as voting during four days of advance polls or by mail-in ballots, the use of which Elections Canada anticipates would significantly increase if an election were held during the pandemic.

He recommends that mail-in ballots posted before the deadline be accepted until the end of business on the Monday following the proposed weekend vote. He acknowledges that would result in a delay in releasing the results of mail-in ballots which may in turn delay results being released for some ridings where a significant proportion of electors voted by mail.

This report by The Canadian Press was first published Oct. 6, 2020.